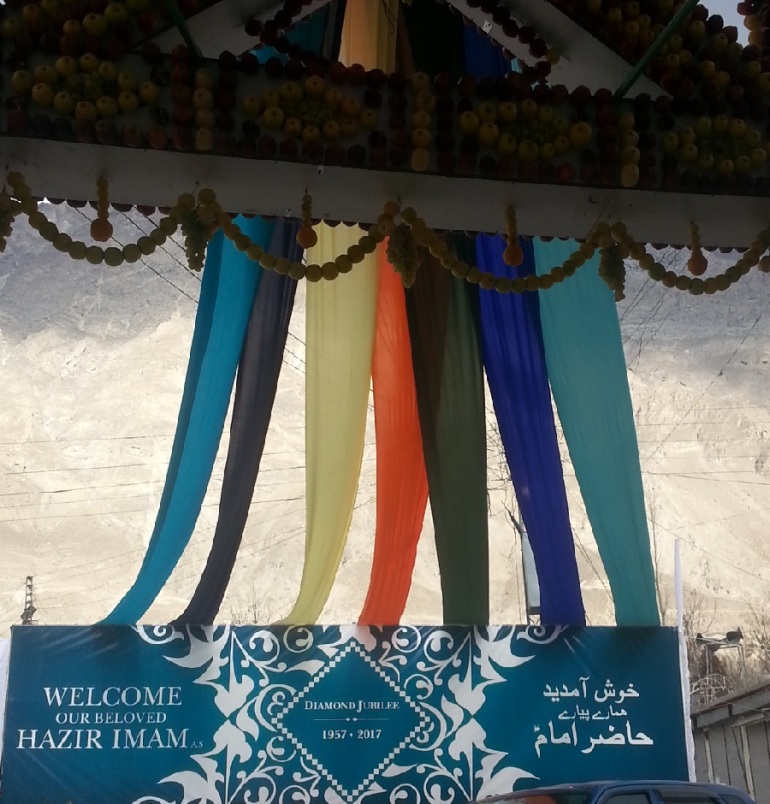 The Canadian Jamat was informed about the Diamond Jubilee visit of Mawlana Hazar Imam, His Highness the Aga Khan, to Pakistan on Sunday, November 12, 2017. At that time we were in the midst of getting ready for Mawlana Hazar Imam’s didars that were to commence later that week – several mulaqats for the Ontario Jamat in Toronto over a four day period and two for the Jamats of Quebec and the Maritime Provinces in Montreal. 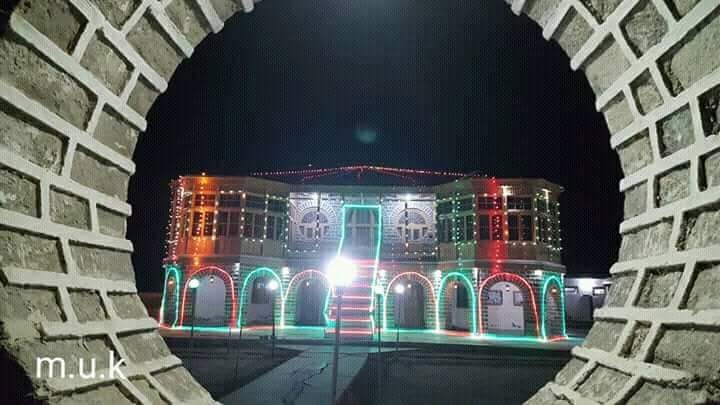 We were therefore full of excitement for us. However, the news of the Pakistan visit filled our hearts with even more happiness and joy. Shortly after the annoucement, we congratulated each other, and I remember how one joyful lady came to me with tears in her eyes and said,  “I am filled with happiness – I have been praying everyday for the past several years that Hazar Imam should give didar to the Jamat in Pakistan.” Mawlana Hazar Imam would be visiting the Jamat after 17 long years.

A lady carefully prepares flowers for a floral composition at the Islamabad Mulaqat.

The patience of the Pakistan Jamat resulted in an extraordinary 13 day visit to the country which has just concluded. During the period of the visit, we provided continuous updates of the visit, and we are now delighted to present to our readers stories, photos and videos which encapsulate the memorable visit.

Islamabad: His Highness the Aga Khan arrives for Pakistan Visit

Scouts and junior guides wave the national flag and the Ismaili flag as they eagerly await the arrival of Mawlana Hazar Imam. Photo: The Ismaili. 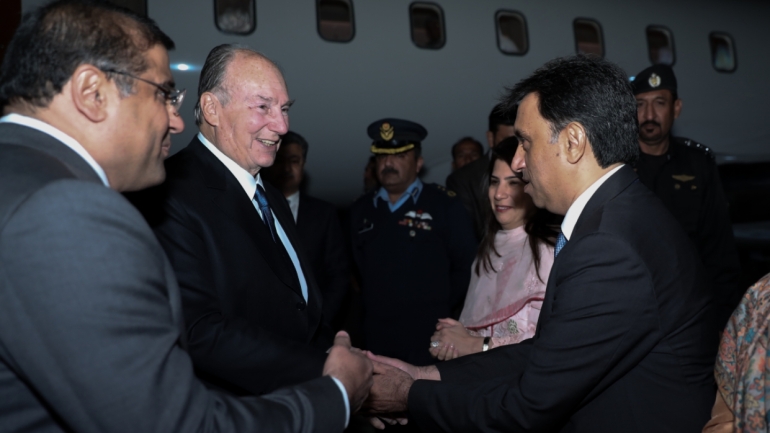 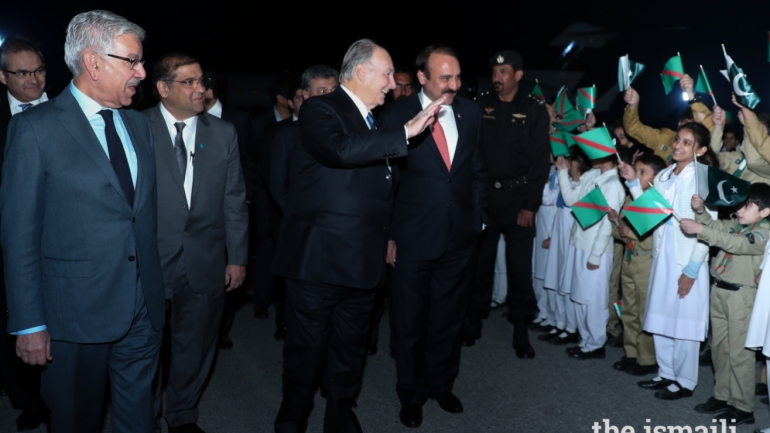 Mawlana Hazar Imam waving happily at the jubilant shaheen scouts and junior guides upon his arrival. Photo: The Ismaili/Akbar Hakim. 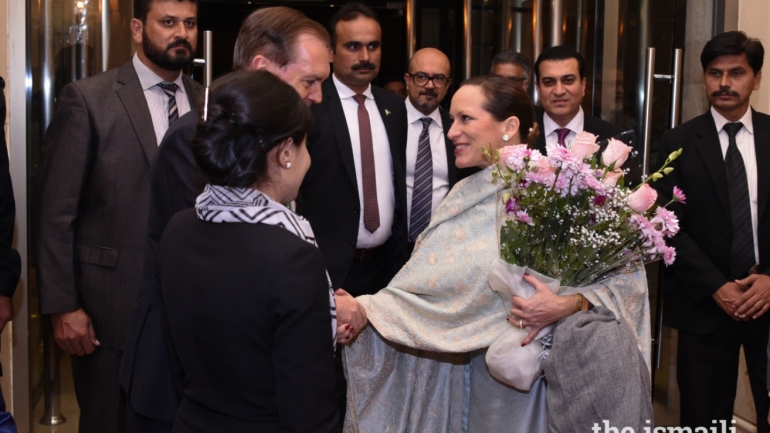 Princess Zahra is greeted upon her arrival in Islamabad. Photo: The Ismaili/Fazal-e-Rabi.

The young boy who is seen presenting Mawlana Hazar Imam with a bouquet inside the Islamabad terminal shared an inspiring story about the few moments Hazar Imam spent with him.  The boy tells the interviewer, see video below, that he said to Hazar Imam that he loved him very much. Then, according to the boy, Hazar Imam replied, “Me too.” Hazar Imam then asked the boy where he came from, and the boy replied that he was from Chitral. Hazar Imam was insightful, and asked the boy where he currently lived, and the boy answered, “Islamabad.” A few moments later, according to the boy, Hazar Imam returned to him and said to him, “God Bless you.”

Mawlana Hazar Imam is welcomed by President Mamnoon Hussain upon his arrival at the Presidency. Photo: The Ismaili/Akbar Hakim.

Mawlana Hazar Imam inspects the Guard of Honour at the Aiwan-e-Sadr. Photo: The Ismaili/Akbar Hakim.

Tweets on His Highness the Aga Khan by Marvi Memon

Marvi Memon, aged 45,  is a Pakistani politician who serves as the Minister of State/Chairperson of the Benazir Income Support Programme. She has been a member of the National Assembly of Pakistan since 2013 as a member of Pakistan Muslim League.

I hav seen his photos in so many houses when on my gilgit Balt campaign.I hav seen how his people adore him.Took me 1minute chat2realize why https://t.co/PoSKyEqYGT

Thanks for nice words about HH Prince Karim Aga Khan. Not many people know about my spiritual leader.

something abt HH Prince Karim which was magical about his connection wth vulnerable. trust me I hav never felt that so strongly in a leader

The Diamond Jubilee lapel pin and its explanation

The Diamond Jubilee lapel pin was distributed to each member of the Hunza (and possibly other Pakistan) Jamats along with the Darbar registration cards. The lapel pin is circular, and bears the crest of the Ismaili Imamat in the centre. The crest has 60 crescents surrounding it, representing Mawlana Hazar Imam’s 60 year reign. A Kufic rendition of the Qur’anic verse (49:13) from Surah Al-Hujurat (the Dwellings) with the following meaning, forms the outer perimeter of the lapel pin.

“O mankind! Lo! We have created you male and female, and have made you nations and tribes that ye may know one another. Lo! the noblest of you, in the sight of Allah, is the best in conduct. Lo! Allah is Knower, Aware.” — Translation by Pickthall.

The verse highlights the ethic of plurality in Islam, a subject that Mawlana Hazar Imam has spoken about throughout his Imamat, and more so in his speeches made in the past 25 years. This verse, combined with the crest of the Ismaili Imamat and the sixty crescents, enable the wearer, especially members of the Ismaili community, to make a historical statement about their beloved 49th Imam, in the context of what the Imam represents to the community as a religious and spiritual leader, as well as his contributions to human kind.

Flight Delay in Islamabad: “The C130 aircraft in which he was supposed to fly could not takeoff from Islamabad in time. The AKF Helicopter Wing however took over and proved its worth by promptly dashing over to Islamabad in marginal weather and ferried the Imam and his entourage to grace Chitral and allay the anxiety of tens of thousands of the waiting faithful at Garam Chashma and Booni. Due to the four hour delay in scheduled departure from Islamabad and extended ceremonies at both the Deedar Gahs, the Imam decided to stay overnight in Chitral” — Excerpt from ChitralNews.com

Mawlana Hazar Imam in conversation with officials who received him at Chitral Airport. They included Magfirat Shah, District Nazim, Salim Khan, MPA.l, Khyber Pakhtunkhwa,  Syed Zaheer ul Islam, Commissioner, Malakand Division, among others. He then departed to grace the Jamats with Darbars in Booni, Garam Chashma (both in Chitral), and Yasin and Alibad (both in Gilgit-Baltistan) Photo: The Ismaili/Imtiaz Alwani.

Helicopter departure from Chitral to Booni 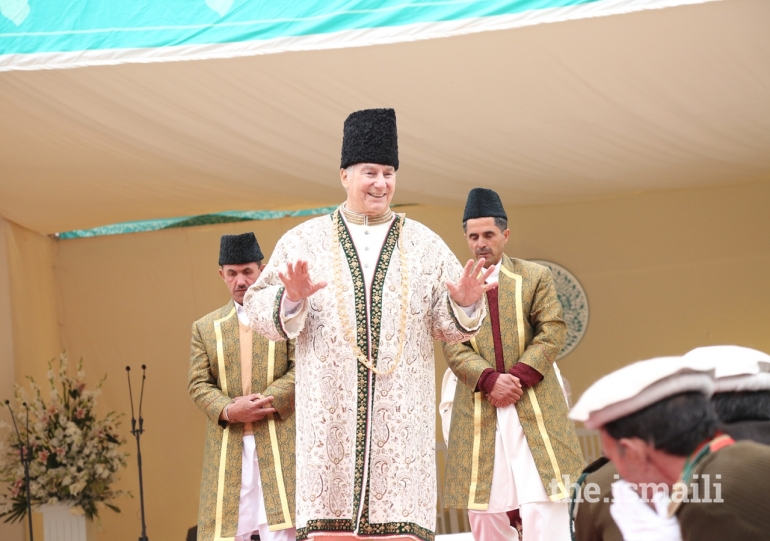 Mawlana Hazar Imam addresses the Jamat during the Darbar at Booni, Upper Chitral. Photo: The Ismaili.

Mawlana Hazar Imam walks through the Jamat during the Darbar at Booni, Upper Chitral. Photo: The Ismaili/Karim Sadruddin. 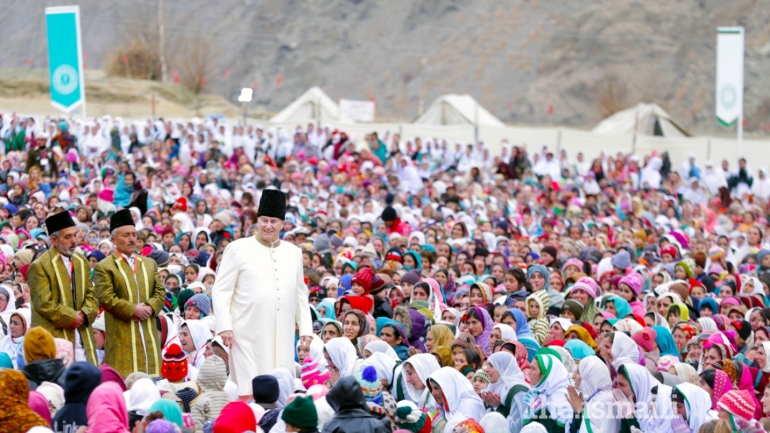 Mawlana Hazar Imam walks through the Jamat during the Darbar at Garamchashma, Lower Chitral. Photo: The Ismaili/Amirali Rimjee. 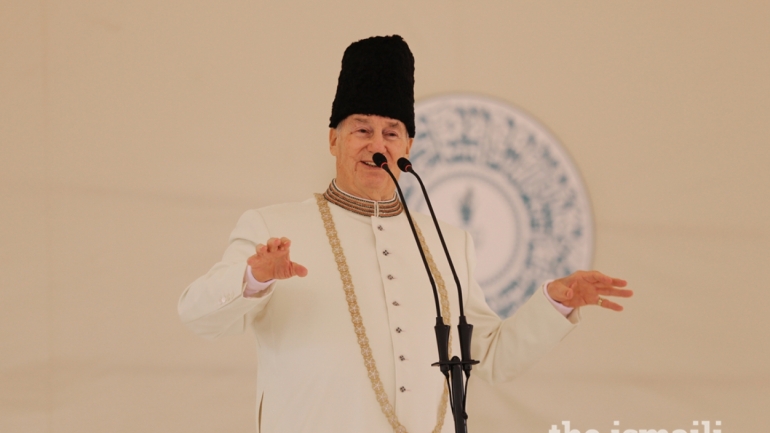 Mawlana Hazar Imam addresses the Jamat during the Darbar at Garamchashma, Lower Chitral. Photo: The Ismaili. 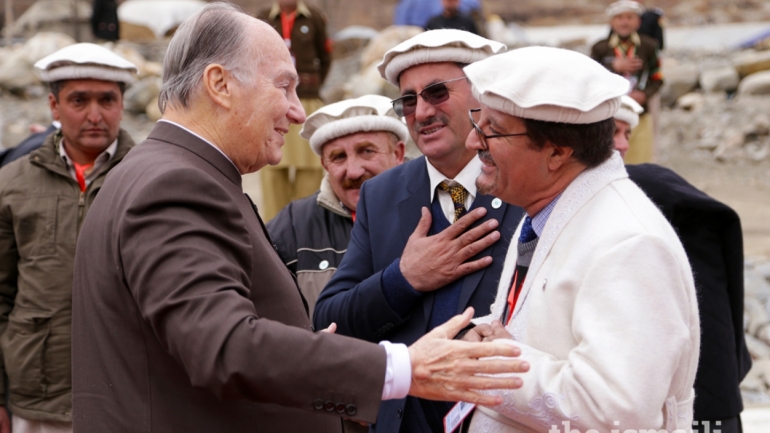 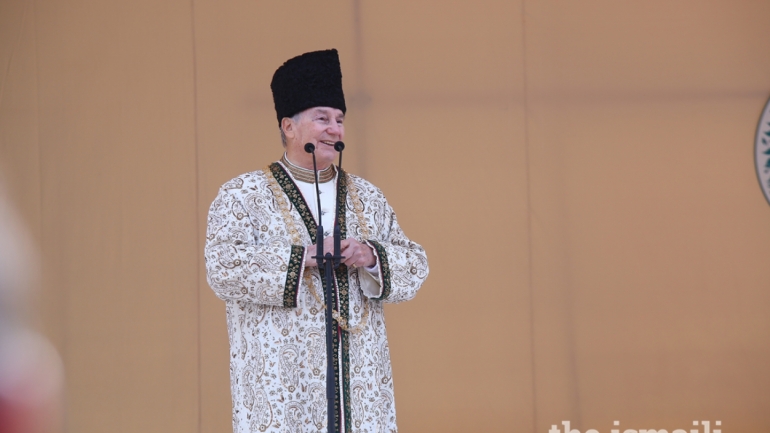 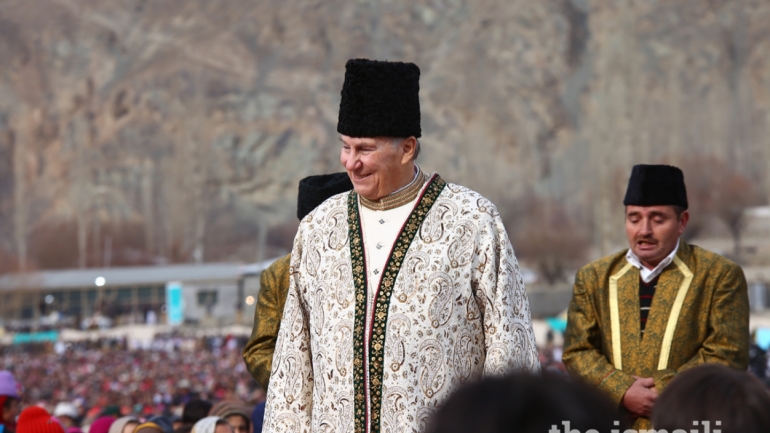 Mawlana Hazar Imam walks through the Jamat during the Darbar at Taus, Yasin.
Photo: The Ismaili/Haseeb Chagani. 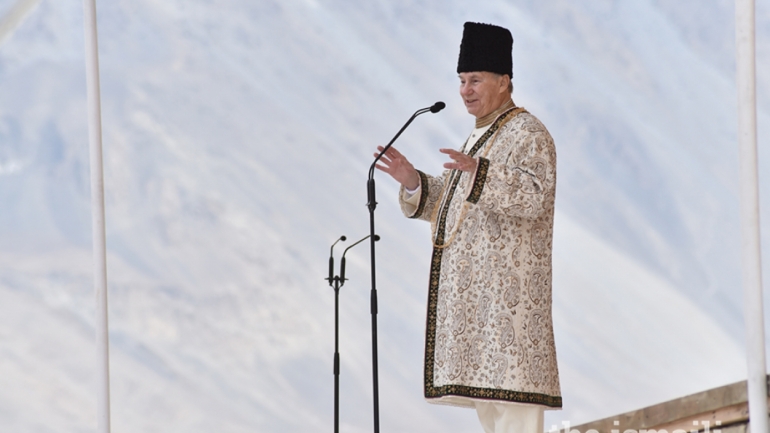 I was bestowed Didar Mubarak and Darbar in the glorious pandal at Yassin, as I belong to Yassin Valley. We the Jamat in Yassin feel extremely fortunate and lucky as Mawlana Hazar Imam gave us his loving blessings and unmmeasurable affection at our door step. Through this Didar, he gave us the splendid chance to serve those Jamaats who had come from the rural areas of Northern Pakistan. We did the very best we could for those who had come from far and wide. Mawlana Hazar Imam was very happy during the Didar and gave us a loving Farman and conveyed his loving blessings with deep affection. He came thrice on the stage and I have no words to explain how I feel at the moment. I pray for the happiness of each and every Ismaili brother and sister living in the world today. 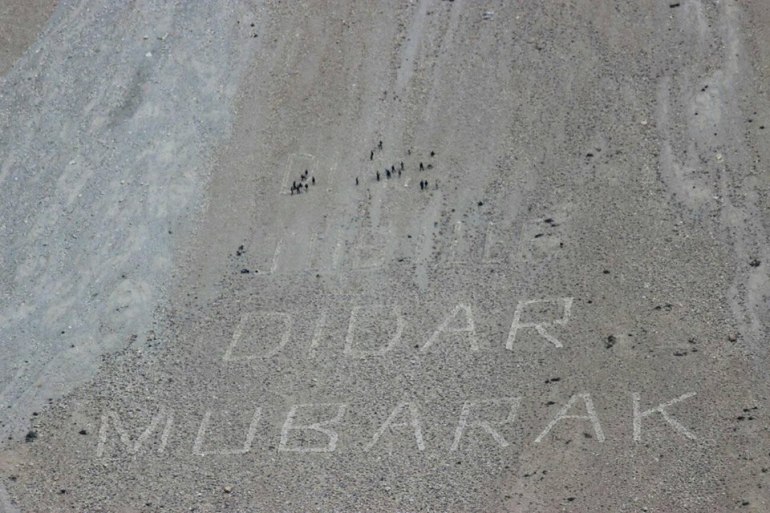 Ismaili youth in Passu, a town north of Aliabad, Hunza, etch the words “Diamond Jubilee” on the lower slopes of the Cathedral Mountains. Photo: Sadrudin Sakhi.

This amazing gate at the Aliabad Darbar site has captured the entire Ismaili world’s attention. Designed by the Sost Council, it contains inscriptions from a Persian poem by Kokab Peshawari. It is in praise of Mawlana Hazar Imam and the poem is mostly versed into songs and qasidas for Hazar Imam. Photo: Barakah/Faqir Ullah Khan. 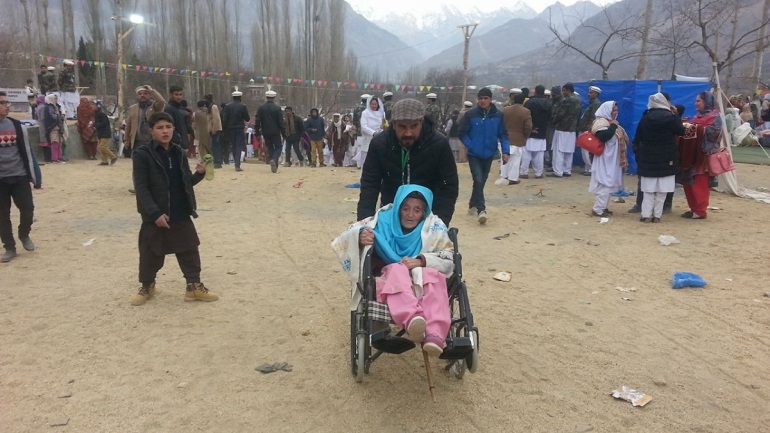 A sea of vibrant carpet colours at the didargah in Aliabad. Photo: Barakah/Faqir Ullah Khan. 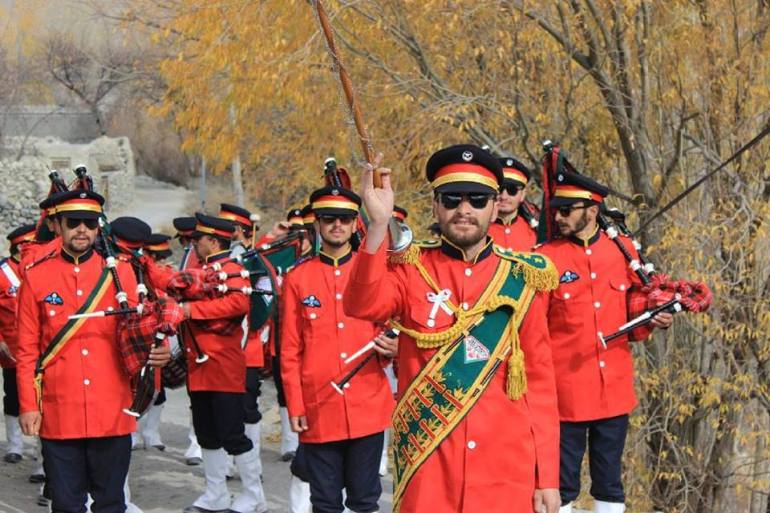 The Diamond Jubilee Band in the town of Passu.  Photo: Sadrudin Sakhi.

When Mawlana Hazar Imam arrived at the didargah in Aliabad, the Jamat’s emotion and excitement reached its peak. Tears started rolling down our faces without control as his helicopter landed. We were tens of thousands in this huge landscape surrounded by mountains. Our wish was for a glimpse of our beloved Imam. More tears flowed as he showered that glimpse upon us with all his grace and mercy – we felt his Zahiri-u-Noorani Didar after 17 long years! This was happening at a historical time of his Imamat – 60 years! The Diamond Jubilee was an unbelievable occasion for us.

Tajik Eagle and Alim Sobir have tea and apricot cake before their 200km three to four day walk back to their home town Sherisabz Chipurson. Many other individuals did the same to bring back the memory of old times. Photo: Barakah/Faqir Ullah Khan.

There were lively and emotional scenes all around the Didargah. Mawlana Hazar Imam wished for the Jamat that “your life evolve in sunlight”. As you can imagine, these words deeply moved and inspired us.

To remind us of the old time obstacles that our parents and grandparents had to live through, some youngsters from Moorkhun, Ghulapan and Shimshal traveled on foot for Darbar to Aliabad, walking more than 100km to show their devotions, love and faith for Mawlana Hazar Imam and to fulfill their wishes. We heard the same from a businessman from Ghulapan, who traveled about 100km from his hometown to Aliabad, with recitations and tasbih.

Mawlana Hazar Imam grants a Darbar to the Jamat during his Diamond Jubilee visit in Aliabad, Hunza. Photo: The Ismaili/Razi ud Din. 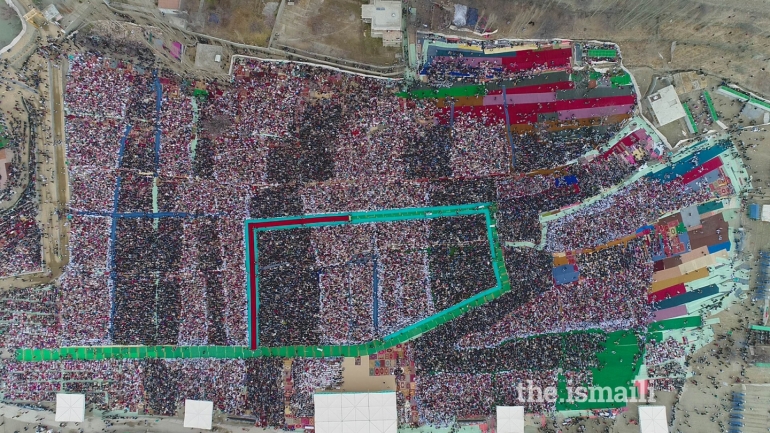 An aerial shot of the Jamat gathering for the Darbar at Aliabad, Hunza. Photo: The Ismaili.

A gate at the Darbar site in Aliabad decorated with apples – Good health to all after a great goodbye! Photo: Barakah/Faqir Ullah Khan. 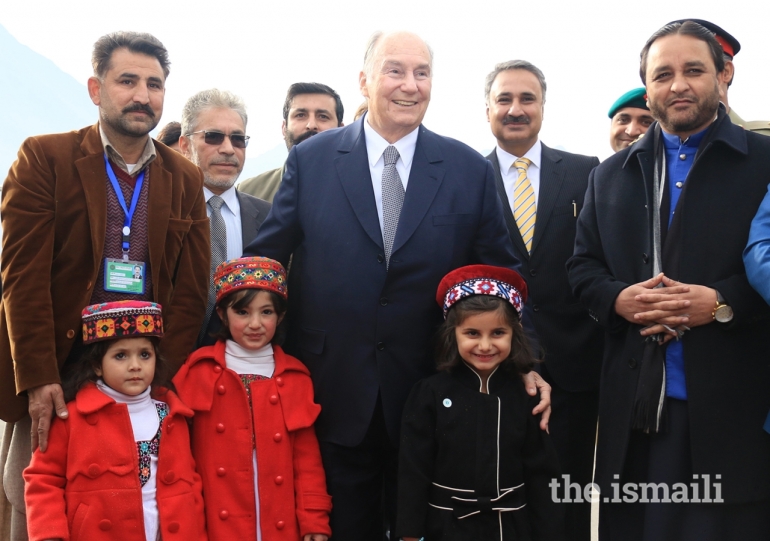 Mawlana Hazar Imam joins children who presented him with a flower bouquet for a group photograph at the Gilgit airport. Photo: The Ismaili/Kamran Baig.

Mawlana Hazar Imam is received in Gilgit by Mir Ghazanfar Ali Khan. The Mir currently holds the office of Governor of Gilgit-Baltistan. He was appointed to the position of governor on November 24, 2015 by the then Prime Minister of Pakistan, Nawaz Sharif. 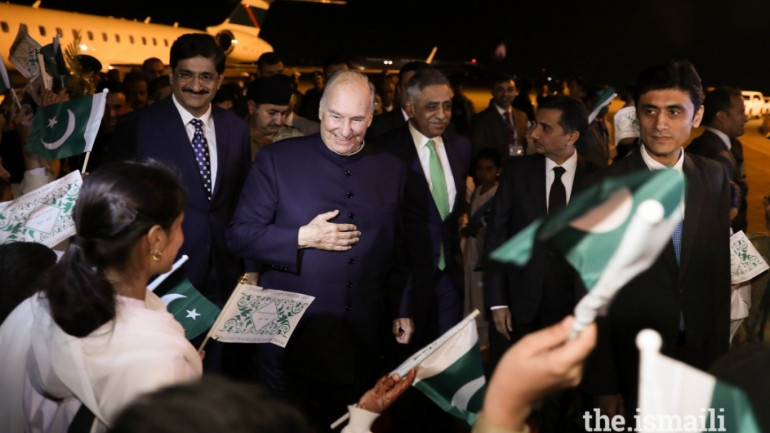 Mawlana Hazar Imam is received by Muhammad Zubair, Governor of Sindh and Syed Murad Ali Shah, Chief Minister of Sindh, and greeted by Junior Guides and Shaheen Scouts from the Sindh Jamat upon his arrival at Karachi airport. Photo: Akbar Hakim 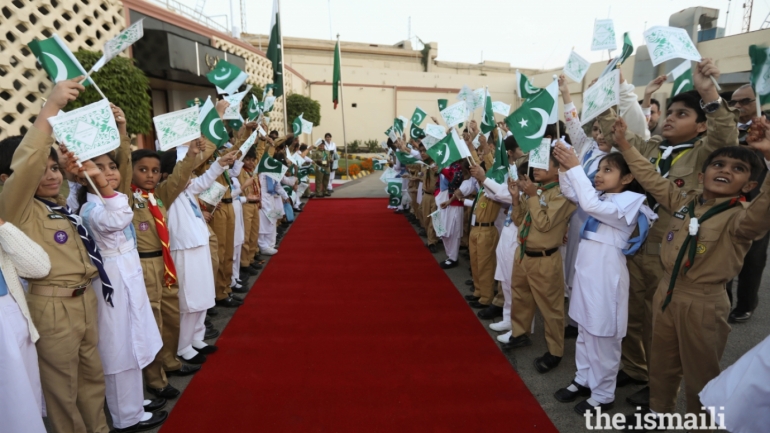 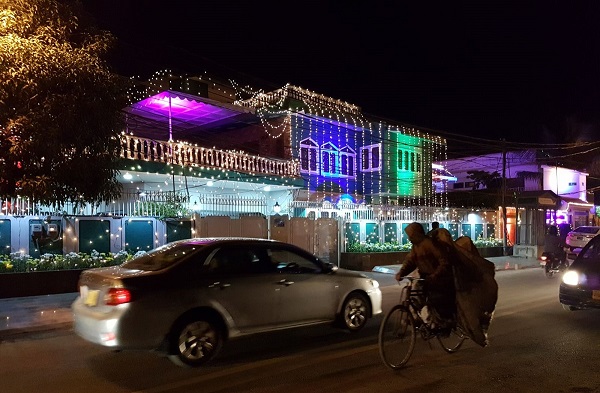 A house in a Karachi neighbourhood beautifully decorated for the Diamond Jubilee visit of Mawlana Hazar Imam. Photo: Barakah. 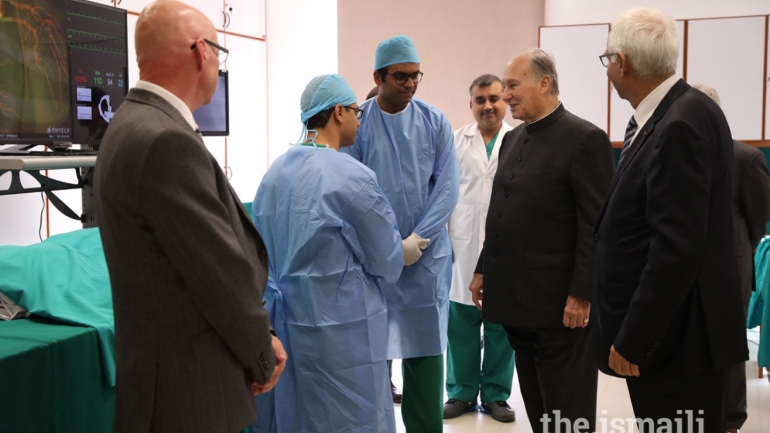 Mawlana Hazar Imam in discussion on how high-tech simulators can be used to teach students how to treat heart disease at CIME’s cardiac catherization lab. Photo: Akbar Hakim. 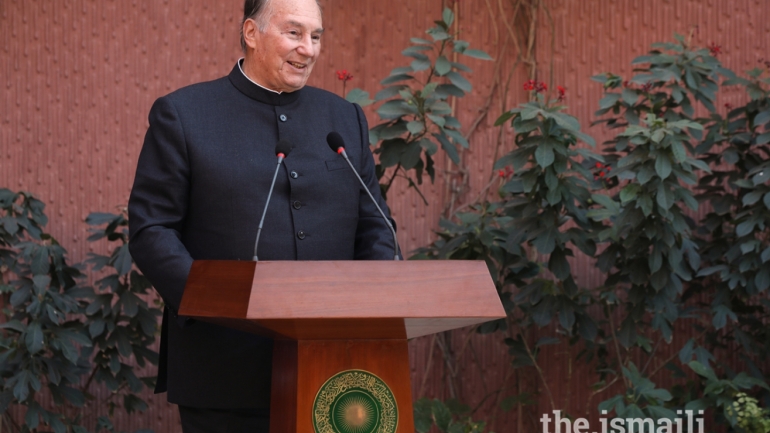 Mawlana Hazar Imam speaking at the inauguration of the CIME’s facility at the Aga Khan Ubiversity. Photo: Akbar Hakim

“My love for my Jamat is a lot stronger than yours can ever be for me and I would like you to remember this…you must remember that Imam loves you more, much more than you can ever love him and you must be strong in this knowledge.” — Mawlana Hazar Imam, Karachi, 1964.

In all four ages,
I went about,
looking hard.
I found none
to match you, my lord.

We welcome your feedback. Please complete the LEAVE A REPLY form below or send your comment to simerg@aol.com.