AUDIO RECORDING OF REMARKS BY HIS HIGHNESS THE AGA KHAN UPON RECEIVING UGANDA’S HIGHEST HONOUR ON OCTOBER 9, 2017 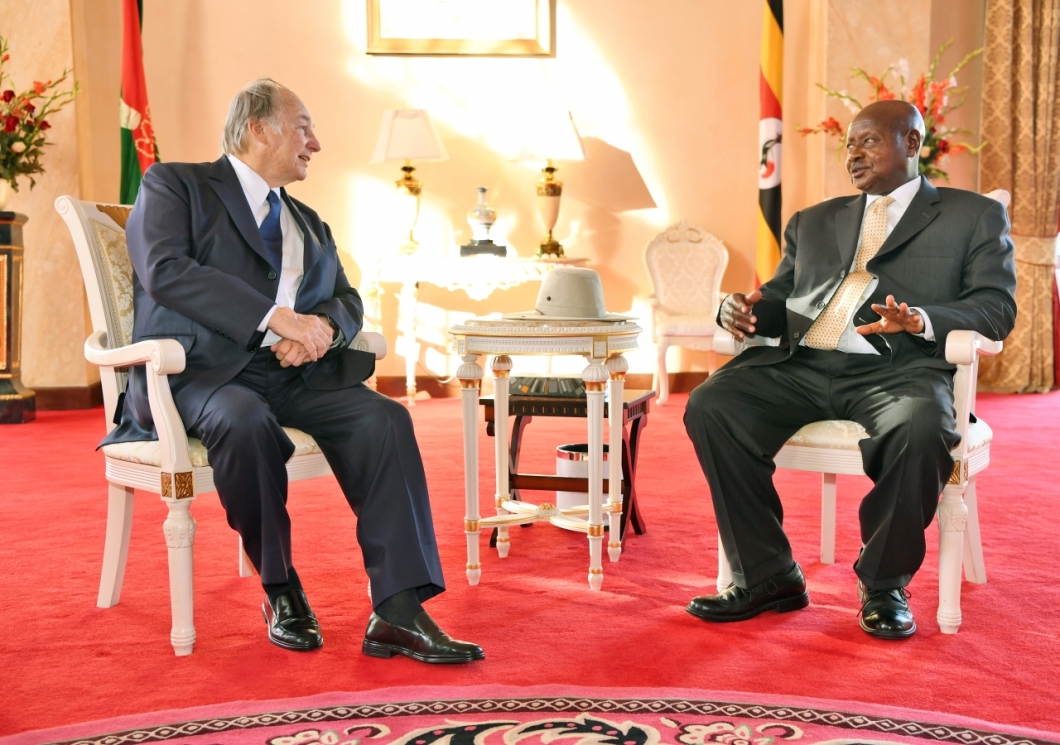 Mawlana Hazar Imam, His Highness the Aga Khan, has arrived in Uganda at the invitation of President Yoweri Musevini, and will join Ugandans on October 9, 2017, to celebrate their 55th Independence Anniversary from British Colonial rule. He will be a special guest at the anniversary celebrations in Bushenyi, a town located 325 kilometres west of Kampala. During the celebrations, Mawlana Hazar Imam will be bestowed with a medal in recognition of his exceptional efforts towards the economic development of Uganda.

October 8, 2017. His Highness is presented a bouquet of flowers upon his arrival in Uganda. Photo: The Ismaili/Rafiq Hakim.

October 8, 2017: His Highness the Aga Khan walks past a guard of honour. Photo: The Ismaili/Rafiq Karim.

In a colourful welcoming ceremony at Entebbe airport on Sunday October 8,  the Uganda Police Band played the Nashid al Imamah and the Ugandan National Anthem and Mawlana Hazar Imam walked past a Guard of Honour. To receive him at the airport were Uganda’s Attorney General, Hon. William Byarhanga, the President of the Aga Khan Ismaili Council for Uganda, Minaz Jamal, and the Aga Khan Development Network (AKDN) representative in Uganda, Amin Mawji, as well as other leaders of the Ismaili community. 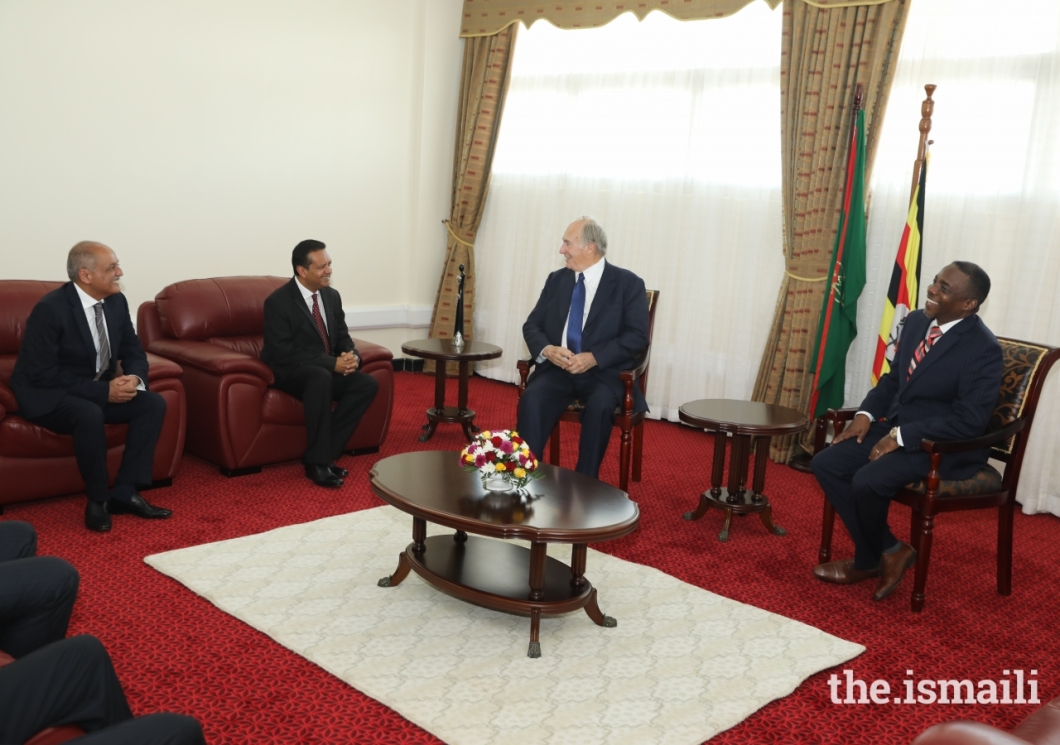 October 8, 2017: His Excellency President Yoweri Kaguta Museveni welcomes His Highness the Aga Khan to the State House in Entebbe as traditional Ngoma dancers perform in the background. Photo: AKDN/Zahur Ramji.

President Museveni then received the 49th Ismaili Imam at State House, Entebbe. The Aga Khan told the President that he was looking forward to attending Uganda’s historical event of her independence in Bushenyi district, which is located approximately 323 kilometres west of Uganda’s capital, Kampala.

While in Uganda, Mawlana Hazar Imam is expected to grace the Jamat with the first Darbar of his Diamond Jubilee year, which marks 60 years of his Imamat as the spiritual leader of the Shia Ismaili Muslim community.

FLASHBACK: THE AGA KHAN AND UGANDA

“I continue to feel deeply about Africa’s enormous potential. These feelings, in fact, have come to form what I would describe as a core conviction. My optimism grows out of several observations: beginning with the continuing rich potential of Africa’s natural resources – including the remarkable talents and the resilient spirit of its peoples.  I would also note the progress which has been made in the economic field, as exemplified by the recent growth rates in Uganda. I am encouraged by the welcoming attitude which has developed in Uganda, and elsewhere across the Continent, for private investment and for public/private partnerships.” — Aga Khan, Kampala, Uganda, August 22, 2007.

October 25, 1957: One of  many ceremonial installations of  His Highness the Aga Khan, that took place around the world during 1957-1958 after he became the 49th Imam on July 11, 1957. This photo is from the installation (Takhtnashini) that took place in Kampala, Uganda.

“The late 1950’s and the early 1960’s marked the end of the colonial era in most of the developing world.  It was a time of enormous hope – but also of fearful challenge.   I remember thinking to myself that, at no time in human history had so many nations achieved independence – and introduced new systems of government – in such a short period of time. I remember the sense of awe I felt – indeed of diffidence – close to a sense of vertigo – when I asked myself how so many poor states would create the political structures – or find the human and material resources, which would give real meaning to their independence.” — Aga Khan, Kampala, Uganda, August 22, 2007.

Date to be determined: His Highness the Aga Khan signs an autograph for Roshi Dhanani. Photo: Abdul M. Ismaily. Copyright.

May 27, 2002:  His Highness the Aga Khan visits the campus of the Aga Khan schools in Kampala, Uganda. Photo: AKDN/Aziz Islamshah.

“If one key to unlocking the potential of Uganda, and of all of Africa, is a spirit of pluralism, then another key should be a commitment to excellence. There was a time, earlier in my Imamat, when mediocrity was considered tolerable here because it was “good enough for Africa”….But in the rapidly globalizing world of the 21st century, the progress of every country and continent will depend on its ability to meet universal standards.  To settle for less is an increasingly dangerous decision.” — Aga Khan, Kampala, Uganda, August 22, 2007. 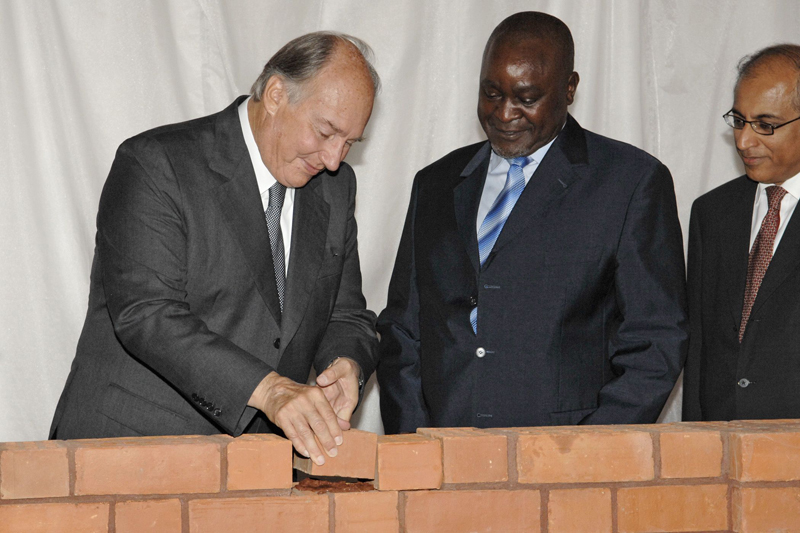 August 22, 2007:  His Highness the Aga Khan lays the foundation stone for the Aga Khan Academy, Kampala in the presence of His Excellency Professor Gilbert Bukenya, Vice President of the Republic of Uganda. Looking on is Salim Bhatia, Director of the Academies Unit. Photo: AKDN.

[The] commitment to achieve global norms, and even to excel, can wisely begin with a nation’s educational institutions – and the preparation of our future leaders.  Here Uganda’s proud traditions – at Makerere University – and other great institutions – should be of special motivation and strength…I believe the people of Uganda can give to the world, in the years ahead, the gift of a vibrant example – as a society which has overcome the worst experiences of past intolerance and embraced the abundant promise of a pluralistic but united future.” — Aga Khan, Kampala, Uganda, August 22, 2007. 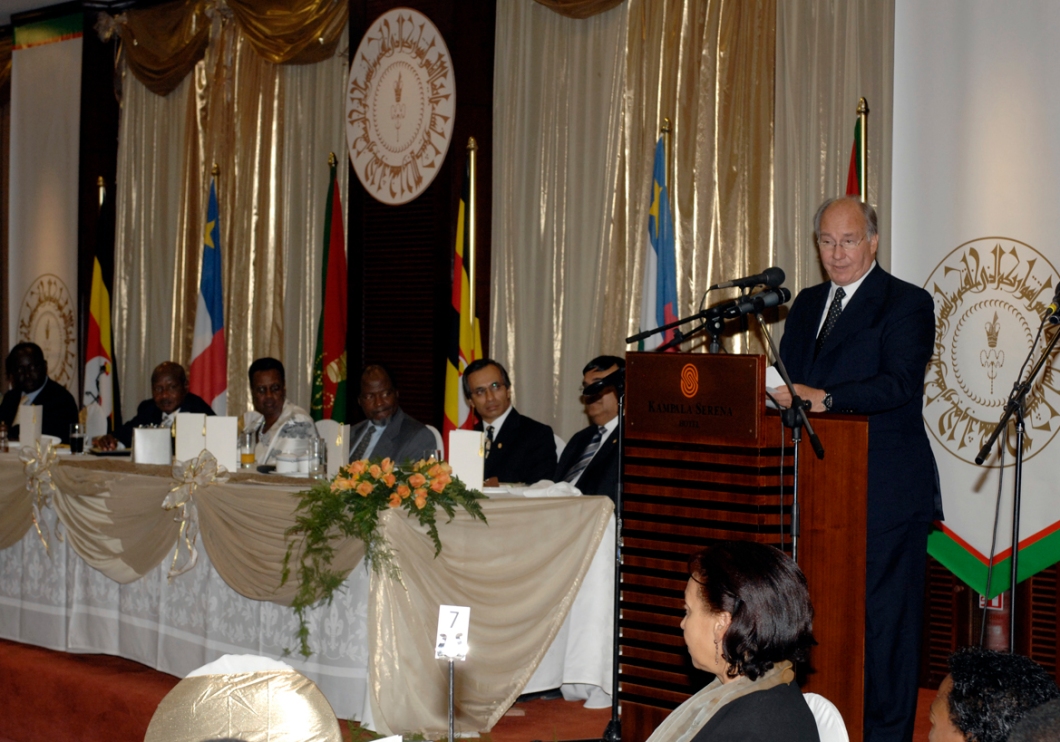 August 22, 2007:  His Highness the Aga Khan talks at  his Golden Jubilee banquet in honour of President Yoweri Museveni of Uganda, with President Francois Bozize of the Central African Republic and Joachim Chissano, former President of Mozambique also in attendance. Photo: AKDN/Gary Otte

October 8, 2012: His Highness the Aga Khan and President Yoweri Museveni of Uganda plant a tree at the inauguration of the Bujagali power plant in Jinja. Photo: AKDN / Gary Otte.

“I had the honour yesterday of joining President Musevini in laying the foundation stone for one of the largest power projects in African history, a great hydroelectric facility at Bujagali.  That project has been a dream in Uganda for many years. When that dream was renewed more recently, the Aga Khan Fund for Economic Development took on the leading role – acting as a catalyst for a wide array of public and private partners.  It was an impressive experience – not only because it showed the depth and breadth of support for Africa’s future, but also because of the Uganda government’s determination to clear the path for this project, in innovative and effective ways. The result was that our ceremony yesterday came less than two years after we became officially involved – a remarkably short time as these things go – reflecting a healthy sense of urgency. ” — Aga Khan, Kampala, Uganda, August 22, 2007.

February 26, 2015. As Chancellor of Aga Khan University, His Highness the Aga Khan presents diplomas to the graduates of the ceremony, held in Kampala, Uganda. Photo: AKDN/Zahur Ramji. 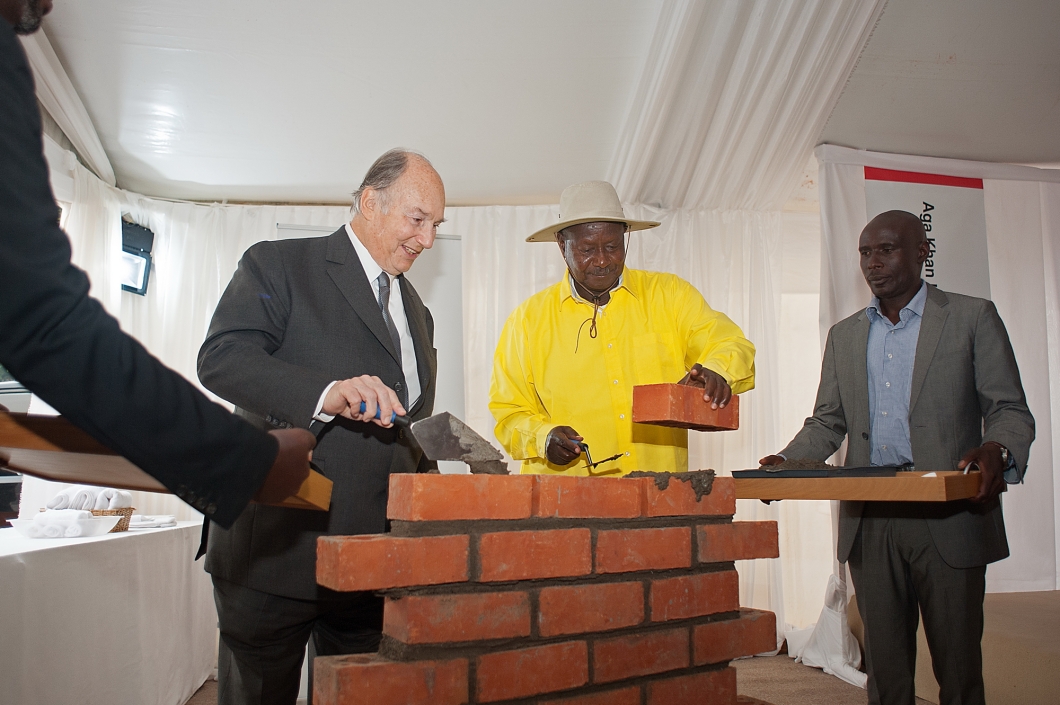 December 17, 2015: His Highness the Aga Khan and His Excellency President Yoweri Museveni of Uganda lay a brick at the Nakawa site to symbolise the foundation stone-laying for the Aga Khan University Hospital. Photo: AKDN/Will Boase.