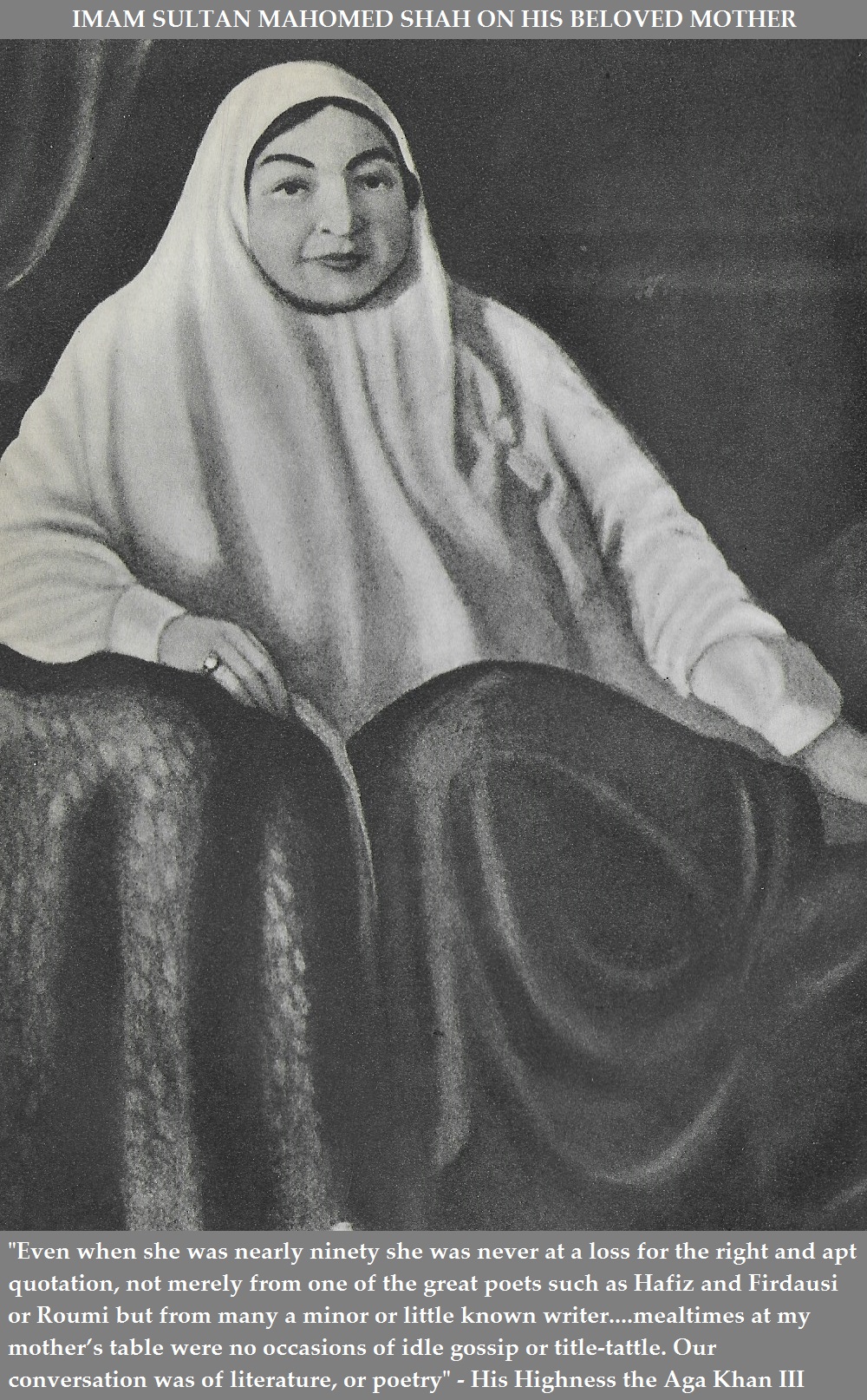 One such a lady was Sitt al-Mulk, the elder sister of the 16th Ismaili Imam, al-Hakim. Hers is a story of “A real Fatimid Princess” as a young girl I know would say, and mothers would love to tell their little daughters and granddaughters her story, and how she played a pivotal role during the reign of our 17th Imam, the Fatimid Imam-Caliph Al-Zahir. I am aware that non-Ismaili historians have portrayed her as being talented but controversial. But in my eyes and heart I feel she opened a path to a greater fulfillment for women in both secular as well as religious matters.

Another lady I admire greatly was our late Imam Sultan Mahomed Shah’s mother Nawab Alia Shamsul-Mulk, or Lady Ali Shah. She came from an impeccable Persian aristocratic family and right until her death she remained active and vocal in the community affairs and she of course brought up our late Imam, one of the greatest of our Imams. Many people have documented their impressions of meeting Lady Ali Shah, being and working with her, her accomplishments and her role in the community affairs, her generosity and a beautiful nature. These are well summed up in Mawlana Sultan Mahomed Shah’s Memoirs of Aga Khan. Over the years, I have read the late Imam’s autobiography a number of times, and I am always extremely moved when I come to the page where he speaks of his mother. I will let our beloved 48th Imam speak of her through the following excerpts from his Memoirs. 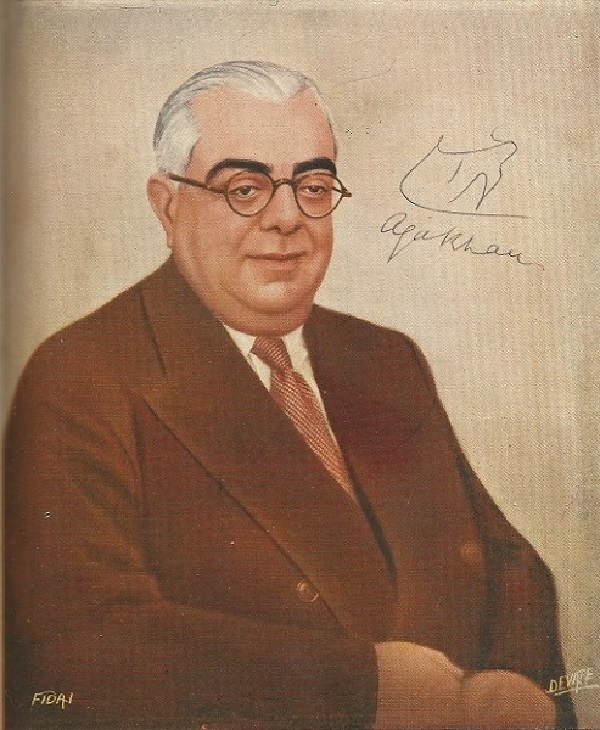 My mother was herself a genuine mystic in the Muslim tradition (as were most of her closest companions); and she habitually spent a great deal of time in prayer for spiritual enlightenment and for union with God. In such a spirit there was no room for bigotry. Like many other mystics my mother had a profound poetic understanding. I have, in something near ecstasy, heard her read perhaps some verses by Roumi or Hafiz, with their exquisite analogies between man’s beatific vision of the Divine and the temporal beauty and colours of flowers, the music and magic of the night, and the transient splendors of the Persian dawn.

The home in which I was brought up was a literary one. I have referred to my mother’s poetic sense. She was deeply versed in Persian and Arabic literature, as were several of her ladies-in-waiting and closest women friends. My mother knew a great deal of poetry by heart and she had a flair for the appropriate classical quotation — a flair which, I may say, she never lost throughout her long life. Even when she was nearly ninety she was never at a loss for the right and apt quotation, not merely from one of the great poets such as Hafiz and Firdausi or Roumi but from many a minor or little known writer.

One little anecdote may explain it. Shortly before she died a cousin of mine quoted one night at dinner a verse of Persian poetry which is rarely heard. In order not to bother my mother or worry her, I attributed it to Hafiz. Not at all, said my mother, that is not by Hafiz, and she gave the name of the poem and the name of the rather obscure poet who had written it.

A consequence of this characteristic was that mealtimes at my mother’s table were no occasions of idle gossip or title-tattle. Our conversation was of literature, or poetry; or perhaps one of the elderly ladies who traveled to and from Tehran a great deal would talk about her experiences at the Court of the Shah.

My work in the international field, and its crown and climax in my year as President of the League [of Nations], had especially delighted my beloved mother. When I first went to Geneva she was over eighty, and she followed my work there with unflagging interest. Each year that I went to India we talked together as fully and as frankly about this as we had, throughout my life, shared our interests, our joys and our sorrows. For a very long time she retained her health, all her faculties, her keen zest for life and all its concerns, whether public and political or family and domestic. When the 1937 session of the Assembly ended, I went to my home in the South of France, with no reason to believe that my mother’s health — she was by then in her eighty-eighth year — was causing any serious anxiety. Nor indeed was it, for she was maintaining her accustomed tranquil and happy way of life.

She had seen both my sons, Aly and Sadruddin, the latter of whom, as a little boy, was a special joy and comfort to her, both when she came to Europe and during a summer which he and his mother spent with her in Lebanon. He bore, too, the name of my elder brother who had died in infancy, and this particularly rejoiced my mother’s heart. She did not see her great-grand-children, Aly’s two boys, Karim and Amyn, but she knew all about them and she chose both their names, the younger bearing that of her brother who died as a young man in the 1880’s. She had, as I have recorded, been present at my first Jubilee, and had been made especially happy by the congratulatory telegram sent by Lord Wigram, on behalf of King George V, just before the news of the King’s death cut short our celebrations.

Eager, affectionate, pious, alert to every new happening and new interest, my mother in her last years was someone who radiated a sense of joy and goodness among all who knew her.

It was at the end of 1937 that I had a cable from India saying that she had been taken seriously ill and bidding me hasten to come to see her. I flew to India at once, in the fastest aircraft of those times, which took three and a half days to reach Bombay.

All her life my mother had retained the habit of a Turkish bath. In each of our houses in India we had a regularly equipped Turkish bath, with dry, properly heated alcoves, the correct water system, and as its climax, a hot pool and a small and very cold pool. My mother had a regular bath once a week, with all its traditional accompaniments of Turkish and Persian massage; she had a manicure and a pedicure, and in the Eastern fashion she had her hair dyed with henna. Coming from her bath one day in November she had a stroke; she recovered consciousness but thereafter her mental faculties were impaired and her memory was gone, except for brief periods of clarity and vision.

She was at our house at Malabar Hill. Her doctor — incidentally a descendant of one of my grandfather’s original followers from Iran who had become a member of the Indian Medical Service — warned me that I must expect to find a great change in her. I was surprised to find that her physical health seemed excellent, but the mental breakdown except for the moments of lucidity which I have just mentioned — was almost complete. I spent most of my time with her; and it was a great joy when occasionally she fully recognized me and talked to me.

All her long life my mother had been animated by one simple, sincere desire: that when the time came, she should die and be buried on Muslim soil, by which she meant a land ruled by a free, independent and sovereign Muslim government. To this was knit one more longing: that in death she should lie beside my father, whom she had dearly and deeply loved, and for whom her mourning from the moment of his death more than fifty years before had been as profound, as durable and as touching as Queen Victoria’s for her beloved Prince Albert.

As soon as I could, therefore, I made preparations to have my mother taken to Iraq, where an independent Muslim government ruled, and where my father’s body rested at Nejef near Kerbela. There were, obviously considerable difficulties and problems about her journey thither. Medical advice ruled out air travel though I have always believed that my mother, in spite of the various stops that the two-day journey to Baghdad would have involved, would have stood it better than the sea trip. However, it was by boat that she went to Basra and thence by train to Baghdad. I had been to Cairo in the meantime, and I flew back to Baghdad to find her at the house of a cousin of mine, Aga Mustafa Khan, close by the holy shrine of Kadhamin.

A few minutes after I reached her bedside, her eyes opened, and she recognized me. Then in the way that all true Muslims would ask, who seek to follow the Prophet’s example and attain a safe and quiet journey from the midst of the living, she achieved peace and happiness and that final ‘Companionship on High’ for which all yearn.

Before departing this website, may we suggest that you visit Barakah’s Table of Contents for links to more than 140 pieces dedicated to Mawlana Hazar Imam and his family.

About the writer:  Zarina Moosa was a teacher, and has served in various capacities in the institutions of the Ismaili community including the Ismaili Council for Kenya. She was a member of the organizing committee of the U.N. Decade Conference for Women held in Nairobi. She dedicates her spare time to voluntary service. She has taught English to new immigrant women and has also helped out at the Harbourfront Centre in Toronto for a number of years.