This July, make pluralism part of parades and picnics for greater peace and progress across the planet. Let us ponder what pluralism means and its critical need for stability and tranquility in our shared interdependent world.

Pluralism was clearly recognized by President Ronald Reagan in his remarks at the International Convention of B’nai B’rith, Washington, DC, on September 6, 1984:

“Let me speak plainly: The United States of America is and must remain a nation of openness to people of all beliefs. Our very unity has been strengthened by this pluralism. That’s how we began; this is how we must always be. The ideals of our country leave no room whatsoever for intolerance, anti-Semitism, or bigotry of any kind — none.”

Many voices in support of such pluralistic practices — sacred and secular —  have been heard in the past from influential leaders such as Gandhi, Rev. Martin Luther King, Jr., Mandela, and Elie Wiesel just to mention a few. They urged tolerance, forgiveness, compassion, inclusion and peaceful resolution of conflicts and building bridges rather than walls. Pope Francis, President Jimmy Carter and various civil society organizations like the Bill and Melinda Gates Foundation, and many others have been preaching and practicing pluralism in their own ways.

The Aga Khan: The Most Passionate Promoter of Pluralism

His Highness the Aga Khan signs the official guestbook in Governor Deal’s office at the Capitol in Atlanta, GA, during his Diamond Jubilee visit to the USA. Photo: The Ismaili/Akbar Hakim.

However, the most passionate promoter and practitioner of pluralism is virtually unknown in the United States. Therefore, this article focuses on His Highness Prince Karim Aga Khan IV, the 49th hereditary Imam (Spiritual Leader) of the Shia Ismaili Muslims, since July 11, 1957. His namesake private supranational multifaceted socio-economic and cultural development agencies have been active in more than 30 countries during the past six decades. The Aga Khan Development Network (AKDN) employs some 80,000 women and men and is empowered by countless volunteers and over 100 partners, including Canada and the United States.

In 2003, the Aga Khan repeated his recurring message about the critical importance of pluralism, during a speech at ceremony to inaugurate the restored Humayun’s Tomb Gardens, New Delhi, India, on April 15, 2003:

“Tolerance, openness and understanding towards other peoples’ cultures, social structures, values and faiths are now essential to the very survival of an interdependent world. Pluralism is no longer simply an asset or a prerequisite for progress and development. It is vital to our existence.” [1]

The 82-year old, indefatigable, Harvard-educated Ismaili Imam has, for the past 62 years, continuously expanded and improved his vast network’s innovative projects, programs, and initiatives across continents. One of his seven extraordinary projects in Canada is the Global Centre for Pluralism (GCP), which was founded in partnership with the Government of Canada, in Ottawa — the national capital.

On October 26, 2006, at the GCP funding agreement signing ceremony in Ottawa, the then Prime Minister Stephen Harper remarked that “this day has been a long time coming.” He went on to announce the Canadian Government’s intention to contribute substantially to the centre’s endowment fund as well  as conclude a lease agreement making the former home of the Canadian War Museum the world headquarters for the centre. He declared, “In a way, I suppose, we are beating swords into ploughshares.”

The GCP’s first Secretary General is John McNee, a former Canadian Ambassador to the United Nations. The GCP was created to “advance positive responses to the challenge of living peacefully and productively together in diverse societies.” 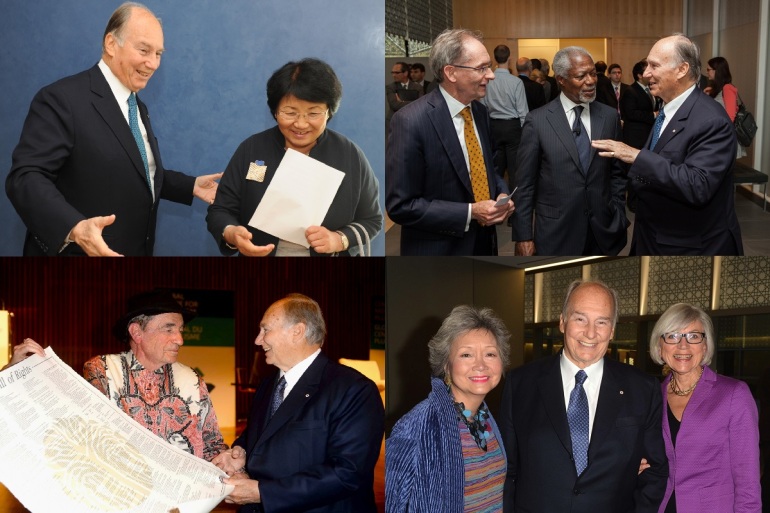 Clockwise from top left: The Aga Khan with Roza Otunbayeva; with Late Kofi Annan and John McNee; with Beverley McLachlin and Adrianne Clarkson; and with Albie Sachs.

While awaiting the completion of the extensive $35 million renovation of the designated GCP Global Headquarters at 330 Sussex Drive (formerly the Canadian War Museum), funded by the Aga Khan, he initiated the GCP Annual Lecture Series in 2012.

The Aga Khan has established other such ambassadorial Ismaili Centres, to promote inclusion, mutual understanding, and civilizations learning about each other, in Vancouver and Toronto, Canada; London, UK; Dubai, UAE; and Dushanbe, Tajikistan. Houston has been selected for the first Ismaili Centre in the USA and will become the seventh one worldwide.

The International Headquarters of the Global Centre for Pluralism at 330 Sussex Drive in Ottawa, pictured a day before it was inaugurated on May 16, 2018. Formerly the Canadian War Museum, it now serves as a global hub for research, learning and dialogue about the values, policies, and practices that support respect for diversity both in Canada and globally. Photo: Barakah/Nurin Merchant. 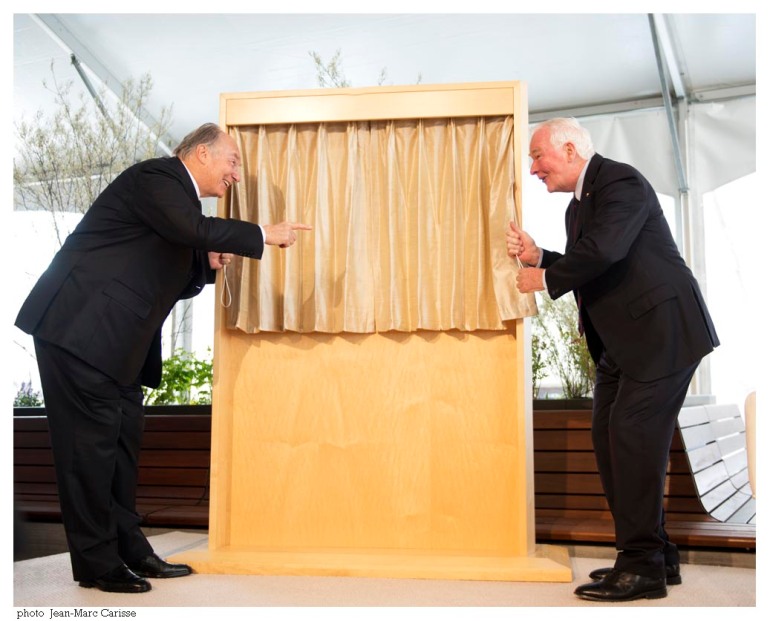 His Highness the Aga Khan and His Excellency David Johnston in a jovial mood joke as they unveil the commemorative plaque of the official opening of the International Headquarters of the Global Centre for Pluralism. Photo: © Jean-Marc Carisse.

In his address at the inauguration of the GCP headquarters, on May 16, 2017, the Aga Khan recognized the new and stronger challenges from “nativist and nationalist” threats to pluralism, and he has adopted a multi-pronged strategy to respond to them through the multifarious agencies of AKDN.

He has long believed that it would be “a wonderful, liberating thing…if more of us, more of the time, could see diversity not as a burden, but as a blessing; not as a threat, but as an opportunity.” [2] His words and work have been along these lines for decades.

Others have raised similar concerns about dangers arising from the misinformation, mischief, and malice on the largely un-policed social media. They have provided platforms which have exacerbated Islamophobia, homophobia, anti-Semitism, chauvinism, xenophobia and intolerance of immigrants and refugees. Social media have often been more inciteful than insightful.

His Highness the Aga Khan with winners and honourable mentions of the first Pluralism Award held in Ottawa on November 15, 2017. Photo: © Jean-Marc Carisse.

The Aga Khan’s manifold intellectual and practical response to these formidable threats included the inauguration, in 2017, of the biannual Global Pluralism Award, valued at $50,000 Canadian per winner. The three winners, who came from Colombia, Kenya, and Australia, were celebrated at the GCP as well as at the Delegation of the Ismaili Imamat for their extraordinary achievements and examples of tackling challenges of living peacefully and productively in their diverse communities. 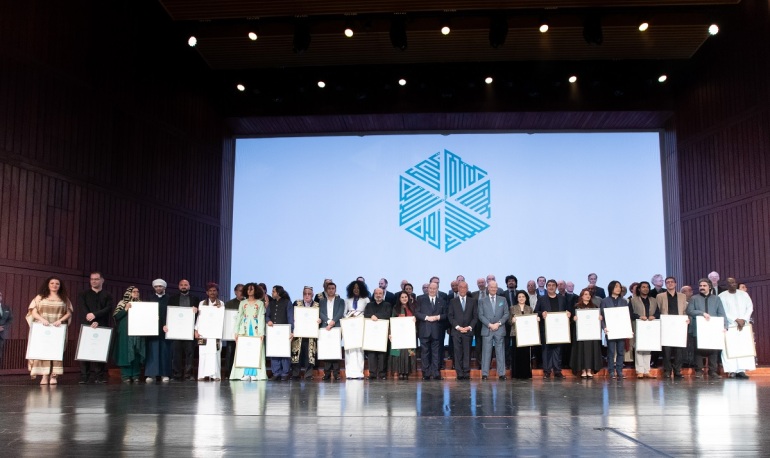 During his Diamond Jubilee state visit to Texas, in March 2018, he announced two major initiatives to promote dialogue across religious and cultural divides. One was the establishment of the first Ismaili Center in USA. It will be located across from the Tolerance Structures — in whose financing the Aga Khan had participated with the City of Houston in 2011. The other Diamond Jubilee initiative was the establishment of the triennial $500,000 Aga Khan Music Awards, music being a universal language and a vehicle for cultural diplomacy. The first of the prizes were awarded in Lisbon in March 2019 to a diverse set of recipients from across the world.

Evidently, not many have the vast resources or the vision and mission of the Aga Khan in this regard. However, each one of us has varying capacities to fulfill our God-given purpose to make this a better world.

It was heartening to read excerpts from some of the 2019 commencement speeches throughout the country. Their recurrent themes were to applaud the graduates for embracing diversity on their campuses and to carry this experience with them into the real world.

Clearly, it seems the time to embrace pluralism is well past due because global peace and stability are under attack on all fronts. On July 4th, the United States of America will celebrate its 243rd Independence anniversary. Let each one of us make a gift to our country — our individual and collective commitment to pluralism.

Before departing this website, please take a moment to visit Barakah’s Table of Contents for links to more than 150 pieces dedicated to Mawlana Hazar Imam and his family.

About the author: Nizar A. Motani has a doctorate in African History from the University of London. He came to America during the 1972 Asian Expulsion from Uganda by Idi Amin. He has taught at Bowdoin College, Brunswick, ME and Western Michigan University, Kalamazoo, MI. After two years as a Publications Officer at The Institute of Ismaili Studies, London, UK, he returned to America making Atlanta, GA his home.