His Highness the Aga Khan, Mawlana Hazar Imam, impressed scientists during his visit to Los Alamos Lab in 1959

The Moslem dignitary eagerly donned the required surgeon’s scrub suit to be measured in the Laboratory’s whole body counter and appeared gratified to learn that his high potassium content indicated top physical condition.

The following is the text of report which appeared under the title “Young Aga Khan tours health lab on surprise Thanksgiving visit” in “NASL Community News” of December 3, 1959, Volume 1 Number 24. See image of the report, below.

His Highness The Aga Khan IV, handsome 23-year-old spiritual leader of Ismaili Moslems in 21 countries, flew in early Thursday by special Carco on a surprise visit to inspect the facilities and the work of the Health Research Laboratory and to discuss research problems with Dr. Thomas L. Shipman, H Division leader, and Wright H. Langham associate division leader for biomedical research.

The young prince is on a two and a half million dollar fund-raising tour to help the African Research Foundation finance a medical research wing at the Aga Khan Platinum Jubilee Hospital established by the prince last year in Nairobi, Kenya, East Africa. The money raised by the foundation will be matched by a personal gift from the Aga Khan. Accompanying the Aga Khan on his trip, which combines fund raising with inspection of various research facilities in the country, are Dr. Thomas D. Rees of New York, president of the foundation; Michael Curtis, Kenya newspaper publisher; and Madame Beguel, the Aga Khan’s private secretary.

The trip to Los Alamos was an off-shoot of a brief visit with Dr. Randolph Lovelace, [1] head of the Lovelace Clinic in Albuquerque and a foundation director. Dr. Lovelace accompanied the group to the Hill.

Friendly, smiling and intensely interested in all he saw, the Aga Khan impressed his scientific hosts with astute questions on every phase of medical research.

He manifested particular interest in the Laboratory’s work in tissue culture and its potentials for cancer research, in the genetic effects of both radiation and inbreeding in mouse colonies, the use of radioactive isotopes in diagnostic medicine, and the possibilities of using whole body counters for studying problems of aging.

The Moslem dignitary eagerly donned the required surgeon’s scrub suit to be measured in the Laboratory’s whole body counter and appeared gratified to learn that his high potassium content indicated top physical condition.

Text of report continues after image…..

Eldest son of Prince Aly Khan, the prince succeeded his grandfather, Aga Khan III as Imam of the Shiah Moslem Ismaili sect on July 12 1957. In nominating his grandson as his successor, the Aga III wrote in his will:

“In view of the fundamentally altered conditions of the world in recent years, due to the great changes that have taken place including the discoveries of atomic science, I am convinced that it is in the best interests of the Shiah Moslem Ismaili community that I should be succeeded by a young man who has been brought up and developed during the recent years and in the midst of a new age and who brings a new outlook on life to his high office as Imam.”

Assuming his responsibilities, the new Imam interrupted his studies at Harvard to make an extended tour of Ismaili settlements in the Middle East, Africa and Asia. A year later he returned to school and was graduated with honors in June this year. Before leaving Harvard, he made a gift of $50,000 which, with a like amount spent by the university, established a ten-year program of scholarship assistance at Harvard for students from Asia and Africa.

Expressing extreme appreciation for his whirlwind visit, the engaging young leader told his hosts: “Don’t be surprised when you hear of my making speeches in Pakistan about all I have learned here. It has been a really wonderful visit.” 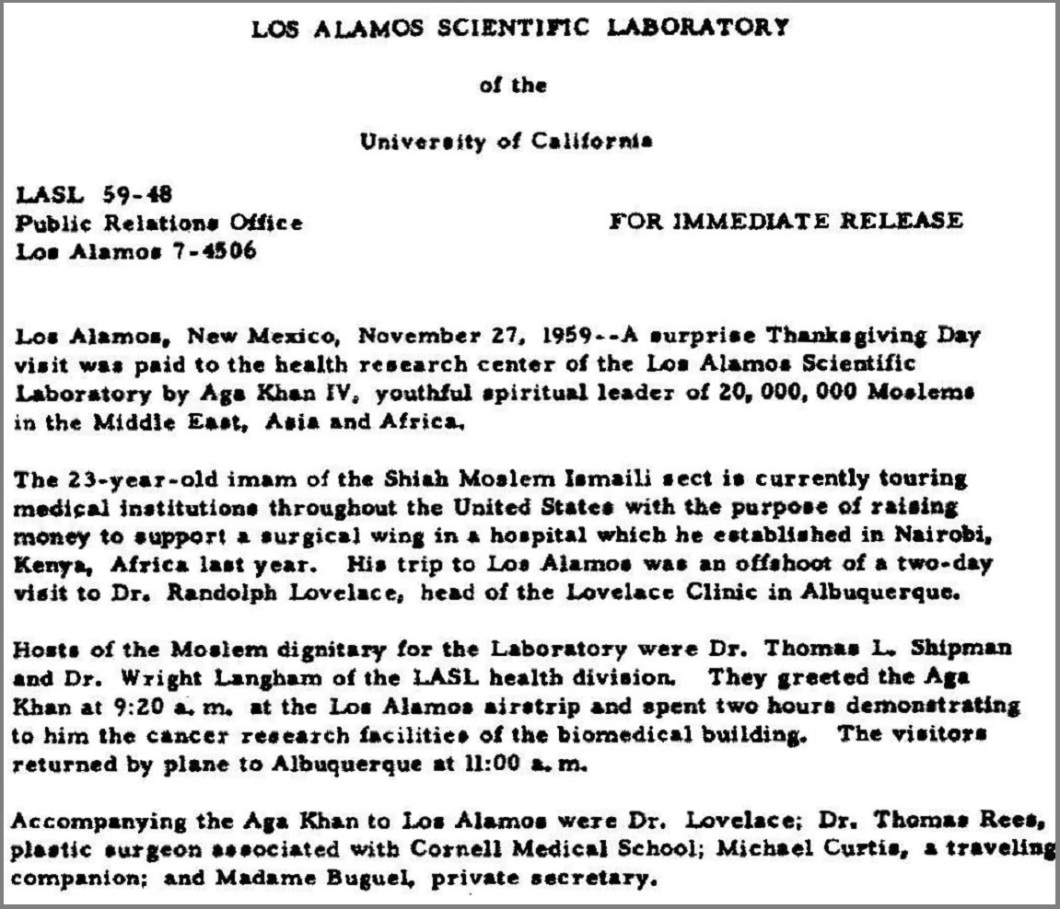 Text of press release shown above:

The 23-year-old Imam of the Shiah Moslem Ismalli sect is currently touring medical institutions throughout the United States with the purpose of raising money to support a surgical wing in a hospital which he established in Nairobi, Kenya, Africa last year. His trip to Los Alamos was an offshoot of a two-day visit to Dr. Randolph Lovelace [1], head of the Lovelace Clinic in Albuquerque.

Hosts of the Moslem dignitary for the Laboratory were Dr. Thomas L. Shipman and Dr. Wright Langham of the LASL health division. They greeted the Aga Khan at 9:20 am at the Los Alamos airstrip and spent two hours demonstrating to him the cancer research facilities of the biomedical building. The visitors returned by plane to Albuquerque at 11:00 am.

This website has an excellent array of thoughtful articles and beautiful photos of Mawlana Hazar Imam. Do not leave this website before checking out Barakah’s Table of Contents.

[1] William Randolph “Randy” Lovelace II (December 30, 1907 – December 12, 1965) was an American physician who made contributions to aerospace medicine. He studied medicine at the Harvard Medical School and graduated in 1934. In 1958 he was appointed the chairman of the NASA Special Advisory Committee on Life Science. As head of NASA’s Life Sciences, he would then play a key role in the selection of the astronauts chosen for Project Mercury. In 1965 Lovelace and his wife Mary were flying in a private plane near Aspen, Colorado. Their pilot became disoriented and flew into a blind canyon. All three people were killed in the crash.

[2] Mr. Michael Howard Curtis, shown at right with His Highness the Aga Khan, was a British Fleet Street editor and executive. He was born in Cambridge, England, in 1920 and was introduced to the Aga Khan just as he had been proclaimed the 49th Ismaili Imam. His recruitment as a staff of the new Imam was intended as a short term assignment as a speech writer and publicity organizer during a series of public appearances related to the Aga Khan’s installation as Imam. His brief assignment, however, grew into an engagement with the Aga Khan that spanned several decades. Michael Curtis was asked to establish the Nation Media Group, which started publishing the Sunday Nation and subsequently the Daily Nation in Kenya. Then later at the Aga Khan’s Headquarters in Aiglemont, France, he oversaw the Ismaili Imamat’s rapidly expanding non-denominational health and educational activities throughout South Asia and East Africa, until his retirement in 1994. He died from cancer in 2004 at the age 84. Please see his excellent piece on the Aga Khan “I was serving no ordinary man”

See Table of Contents for Barakah’s beautiful, thoughtful and wonderful articles and photos.