On media: Advice from the Aga Khan for a new beginning for the world’s press

By HIS HIGHNESS THE AGA KHAN

(Excerpts from an address delivered by Prince Karim Aga Khan to the 30th General Assembly of the International Press Institute in Nairobi, Kenya, on March 2, 1981. The excerpts are compiled and selected from the text of the speech available at AKDN and the April 3, 1981 edition of The Christian Science Monitor – ed.)

I wish to take this exceptional occasion to pay a deep personal tribute to a truly remarkable African who was himself at one time a journalist, then who led his country’s struggle for independence and who finally became the first President of Kenya and an outstanding African statesman. I refer to Mzee Jomo Kenyatta.

“Freedom of the Press” are four of the most commonly used and misused words in the English language, but here in Kenya their meaning was given true substance by the late President’s personal commitment to the independence of the media. I state this today as I was privileged to experience the depth of his conviction on this matter and because I feel I have a personal, unequivocal commitment to uphold what the Father of Kenya upheld so ardently himself. History is unjust or at least very often incomplete in recording the work and thoughts of great men. This must not be the case with regard to Mzee’s exceptional strength and courage in defending this important foundation of democracy.

I accepted this invitation to speak after more than twenty years of work, both in the press and in the third world, as I would like to put forward in this important forum some thoughts and some hopes whose only objective is to help move the present passionate and often acid debate toward a new and more constructive beginning.

Many of the grievances and aspirations expressed by UNESCO (regarding third-world news coverage by Western media) are sincere and perfectly valid. But this does not imply that I am willing to underwrite all solutions proposed by UNESCO.

Some of them have clearly been motivated by ideology and by an entirely different concept of the press as it is understood by most democracies. To me, many of the arguments set forth in the UNESCO debate’s resolutions and declarations are frankly not related to the practicalities of producing newspapers, radio and television programs, books and other forms of communications in the developing world. I have worked to build many bridges between the west and the third world in order to solve practical problems in health care, in education, in architecture, in establishing study financial framework for self-help and disciplined private initiative. But in this field of communications, a cornerstone of our hopes for world peace, I am afraid that what exists is not a bridge, it is a wall.

Whatever has happened to this debate, the problems that originally provoked it have not gone away. The frustrations of the third-world nations are still there, and in many cases growing.

If for many of you the present UNESCO approach is unpalatable, and you are convinced that acceptable solutions cannot be worked out in that forum, then it is imperative that you develop a practical alternative.

How then do we create this new beginning?  How do we re-establish effective communications between the third world and the industrialised world? We must try to isolate the political conflict which always arises over different forms of ownership. I am myself a private newspaper owner, and I believe that disciplined, mature, and recognizable private ownership is the most effective means of managing a newspaper.

What matters is that the organization, whoever owns it, develop sufficient resources and be committed to creating quality newspapers that are responsible, reliable, and readable.

Second, I think we need much more coherent and comprehensive action by the media and governments of the industrial world to make their managerial and technological know-how available to the developing countries.

Third, we all should accept the need for a structured exchange of editorial expertise. The developing countries can make a contribution which is just as important as any of the industrialized nations.

Our fourth task is to make journalism a profession in the truest sense, to give it a status and a level of remuneration appropriate to its enormous responsibilities. Like teaching and nursing, journalism in too many areas today is a discredited profession at the very moment when its powers and what the public expects of it have risen to unprecedented heights. 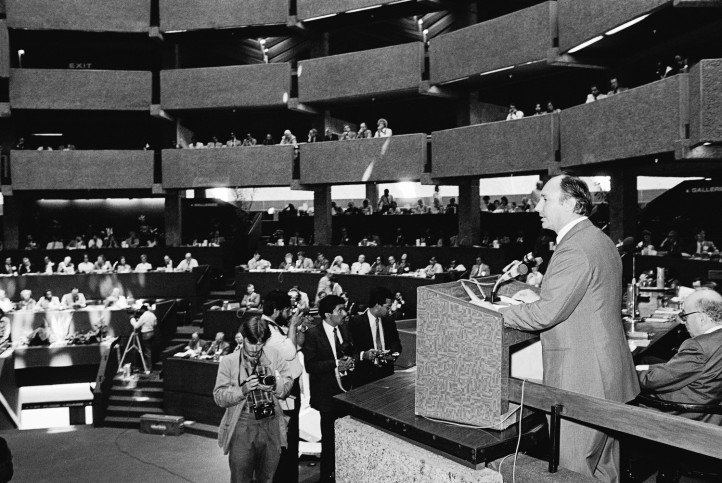 Finally, I realize we have to keep in mind the reluctance of the media in democratic countries to become too closely involved with their governments. This should not be an excuse for failing to create methods whereby much more substantial international resources can be made available to news organizations in the developing nations.

We have all heard of twin cities, why not twin newspaper companies and news organizations between the industrial world and the developing world? These could provide mutually beneficial exchanges of managerial, technological and editorial experience and news.

The press and governments of the industrialized nations could show their commitment to communications development by quickly making the relevant new technology available for credible projects in third-world nations. This should be available under the same preferential financial conditions as any other nation-building programs.

The time of reconditioned teleprinters and secondhand printing presses is over. I am talking about modern plants that can be established with a real chance of commercial success.

It is imperative that standards of reporting be elevated as well. A complaint that the North reports the South superficially, condescendingly, sometimes inaccurately, and without proper social, cultural, economic, and political background, often has real validity.

There are problems of credibility on all sides. It is here that questions of repeated editorial sloppiness or misunderstanding can result in accusations of evil intent. It is here that this whole debate can quickly descend to emotion, anger and stalemate. Yet it is on this very tender area of editorial content that I feel we must see some quick, significant and visible progress. It is what brought the third world together on this issue in the first place.

Many of these countries thought that the industrialized world, largely because of its press, was receiving a distorted image of their young nations and their cultures. They felt that their problems were being magnified, their accomplishments diminished, their aspirations ignored. They felt as though in a nightmare, screaming to be heard but making no sound. The channels and the content of international communications were a monopoly of the North, or so it seemed, and in this respect many people in developing countries felt as powerless as they had under colonial rule.

No matter what happened to this debate at the international level, these basic feelings have not changed. As a Muslim, one of 700 million, I live in daily astonishment about the incomprehension of Islam and its peoples. Some Western media have perpetuated misconceptions which stick like shrouds to the bones of historical skeletons, but in most civilizations the dead are buried. Professor Edward Said of Columbia University has recently illustrated this point in a brilliant article entitled “Hiding Islam”. The fact is that the quality of reporting from abroad is often unacceptably low. There is, therefore, a need to rethink how we select and train the all-important foreign correspondents and foreign editors. Can you sincerely claim to be maintaining foreign staffs that are of the highest quality? Can you really reassure those developing countries who feel to the contrary?

There is a great deal of discontent in developing countries over what is perceived as the failure of the west adequately to respond to the calls for a new world economic order. The call for a new information order is of course linked to these new economic aspirations. It seems to me that efforts on the communications front could prove the West’s willingness to try to correct these world imbalances which it recognizes and on which it can have a significant impact. The high visibility of communications would accelerate this process.

Exchanges – as in the twin newspaper idea – having a Muslim, for example, nearby a foreign editor to explain Islamic concepts – could help infuse this process with a new spirit of cooperation. It would be easy to throw up our hands and say we can move no further because of politics and ideologies. This must not be the answer. I have no miraculous solution but I am convinced that the new dialogue must be focused on practical possibilities. I ask that we all go beyond self-defensive positions, and search our conscience. The International Press Institute is one of the organizations best placed to defend and enhance the profession of journalism and to help implement new and pragmatic solutions to the problems I have described.

This new approach must demonstrate to the developing nations that the media and governments of the industrial world are prepared to recognize the legitimacy of many of the third-world complaints, that they are ready to reexamine their own performance and to respond in practical terms to the needs of the press in developing nations.

Let us all proclaim – as never before – that the democratic concept of press independence is not only the most desirable but by far the most effective method of national and international communication throughout the world.