His Highness the Aga Khan makes his appearance at the homage ceremony on July 11, 2017, to celebrate his Diamond Jubilee. The homage was held at his residence and Imamat Headquarters at Aiglemont in France. Photo: The Ismaili.

In Montreal, approximately 8,000 Ismailis from all across the province of Quebec, gathered on July 11, 2017 at Stad Uniprix (or the Uniprix Stadium) to celebrate the Diamond Jubilee of Mawlana Hazar Imam, His Highness the Aga Khan. The 49th Ismaili Imam, who is directly descended from the Prophet Muhammad (s.a.s.) and Hazrat Ali (a.s.), is only the fifth Imam in Ismaili history to have reigned for 60 years. He assumed the Imamat at the age of nineteen immediately upon the death of his grandfather, Mawlana Sultan Mahomed Shah, His Highness the Aga Khan III, who passed away on July 11, 1957 after having reigned the Ismailis for a record of 72 years. However, Mawlana Hazar Imam, who celebrated his 80th birthday on December 13, 2016, has set a new milestone by becoming the oldest serving Imam in Ismaili history.

The fantastic space at Stad Uniprix in Montreal that was used to host the Quebec Jamat’s celebration of the Diamond Jubilee of Mawlana Hazar Imam on July 11, 2017. The number of screens set-up around the hall ensured that everyone was able to watch the Homage ceremony clearly and without any interference. Photo: Muslim Harji. 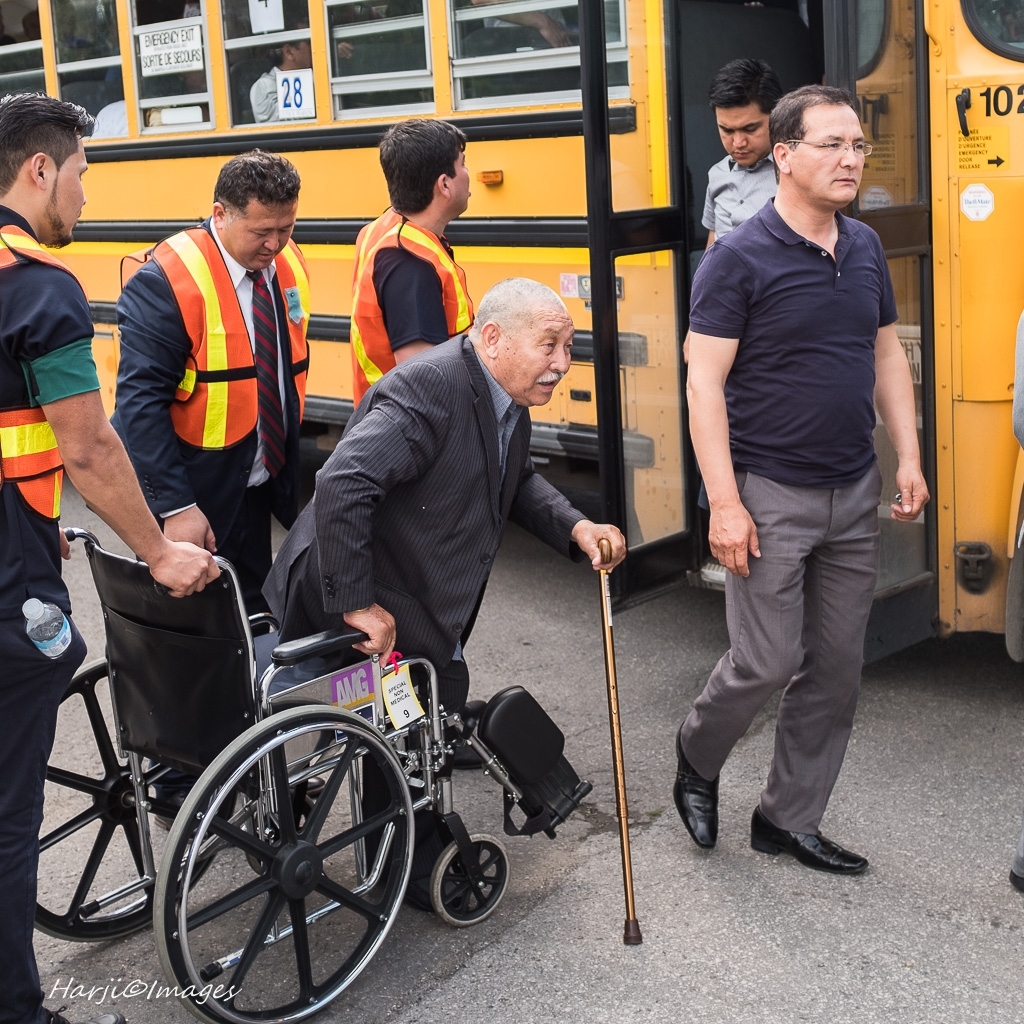 A senior citizen arrives at the grounds of Stad Uniprix to participate in the Diamond Jubilee celebrations. Photo: Muslim Harji.

The celebrations in Montreal were a huge success. Guided by some outstanding Ismaili leadership in Quebec, hundreds of volunteers of all ages ensured that every minute detail of the program was graciously and politely carried through. The elderly were compassionately greeted and transported to the hall, while the rest of the Jamat walked to the event hall from the parking area under beautiful white canopy, serenaded by a live group of singers and musicians singing welcome songs — Khushamudin, Khushamudin. Once inside the hall, the Jamati members’ eyes were drawn to the centre stage that contained the Diamond Jubilee motif as its backdrop. The stage would later become a meeting point for families and friends to take photographs.

Volunteers worked hours to set up the panels for the Diamond Jubilee motif on the stage. The brilliant result of their labour is shown in the next photo.Photo: Muslim Harji.

MCs introduce the evening’s entertainment program against a backdrop of the beautiful Diamond Jubilee motif erected by volunteers at the Stad Uniprix banquet hall. Hundreds of jamati members later converged to have their photos taken at the stage against the background. Photo: Barakah/Malik Merchant.

The President of the Aga Khan Ismaili Council for Quebec and the Maritime Provinces is seen giving a speech in which he congratulated the Jamat on the historical occasion of the Diamond Jubilee and thanked volunteers for their magnificent work. Photo: Malik Merchant

The highlight of the day was a 90 minute video footage of the special homage ceremony that had taken place a few hours earlier at Mawlana Hazar Imam’s residence at Aiglemont, France. The capacity crowd watched their Imam graciously accept Homage from his past and current Ismaili leaders on behalf of his world-wide community. 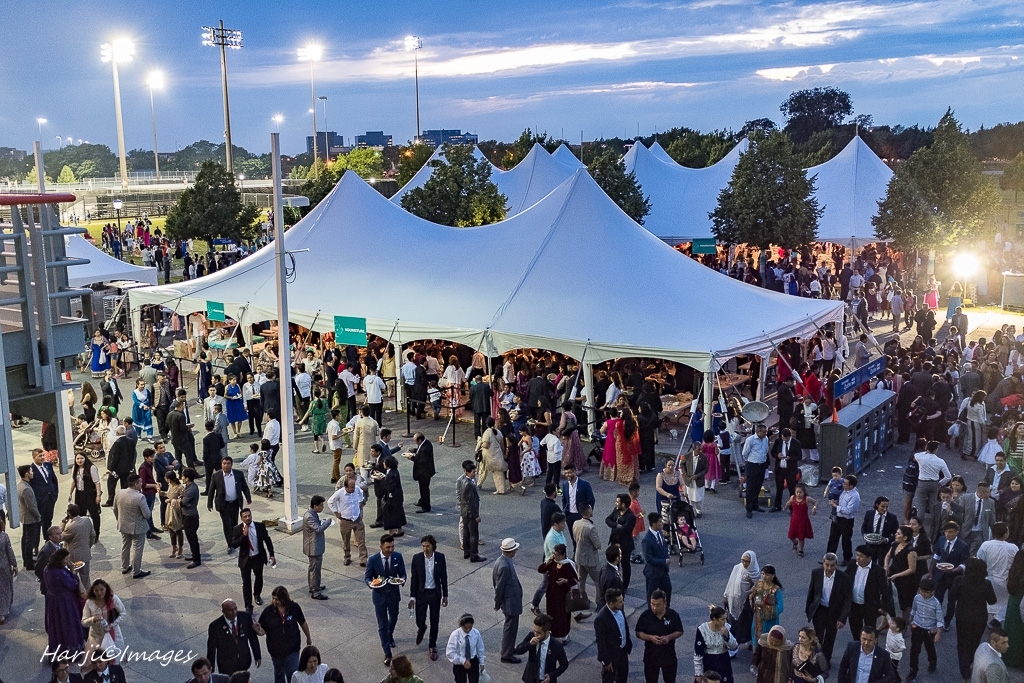 A beautiful scene at a food tent. Waiting time for food to be served was less than a minute. Photo: Muslim Harji.

The video telecast was preceded by special zikr prayers, and singing of traditional Qasidas and Ginans from Ismaili history as well as some religious discourses known as waezes. Once the homage ceremony was completed, a special Shukran prayer was recited as a special gratitude to Almighty Allah for the guidance that He has bestowed on Ismaili Muslims through the Institution of Imamat. Shia tradition maintains that the first Imam, Hazrat Ali, was appointed by the Prophet as his successor by Divine Authority.

The Shukran recitation was followed by normal religious ceremonies that take place on an occasion like Imamat Day. Following the completion of the ceremonies, a hot dinner was served by our joyful catering volunteers, with serving times of less than a minute!

Many sat on the grounds of Stad Uniprix to enjoy the delicious food. Photo: Muslim Harji 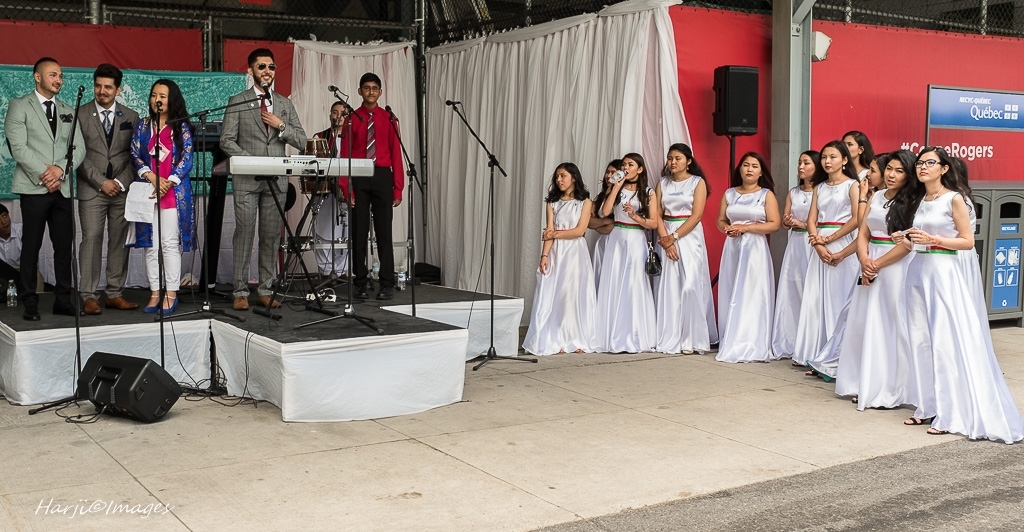 No Ismaili function is complete without a band and marvellous musical performances and dancing. Photo: Muslim Harji.

More performers including some members of the Syrian jamat! Photo: Muslim Harji.

Murids stand in front of an iwan in which Hazar Imam is seen giving didar to the jamat in Nairobi, Kenya. Photo: Barakah/Malik Merchant.

No one appeared to be inconvenienced and as an outsider visiting Montreal to participate in the celebration with my Afghan brothers and sisters, I marvelled at the calmness of the volunteers and the discipline of the jamat for the entire time, approximately 9 hours, that I spent at Stad Uniprix.

We salute and say BRAVO to the leadership as well as volunteers and members of the Quebec Jamat for a truly well-organized event.

Muslim Harji has contributed outstanding photo essays for this blog’s sister websites, namely Simerg.com and Simergphotos.com. He and his wife Nevin have lived in Montreal for over 35 years, where they raised two children and ran a successful business. Upon retirement in 2004, Muslim and Nevin truly started to explore the world. All told, together and individually, they have visited almost 50 countries around the globe, and plan to continue fostering their love for travelling the world.

Barakah welcomes your feedback. Please complete the LEAVE A REPLY form below or send your comment to simerg@aol.com. For links to all the posts in this special project on His Highness the Aga Khan, please see the drop down menu bar at top of this page or click Table of Contents. Also, visit us on Facebook at http://www.facebook.com/1000fold.