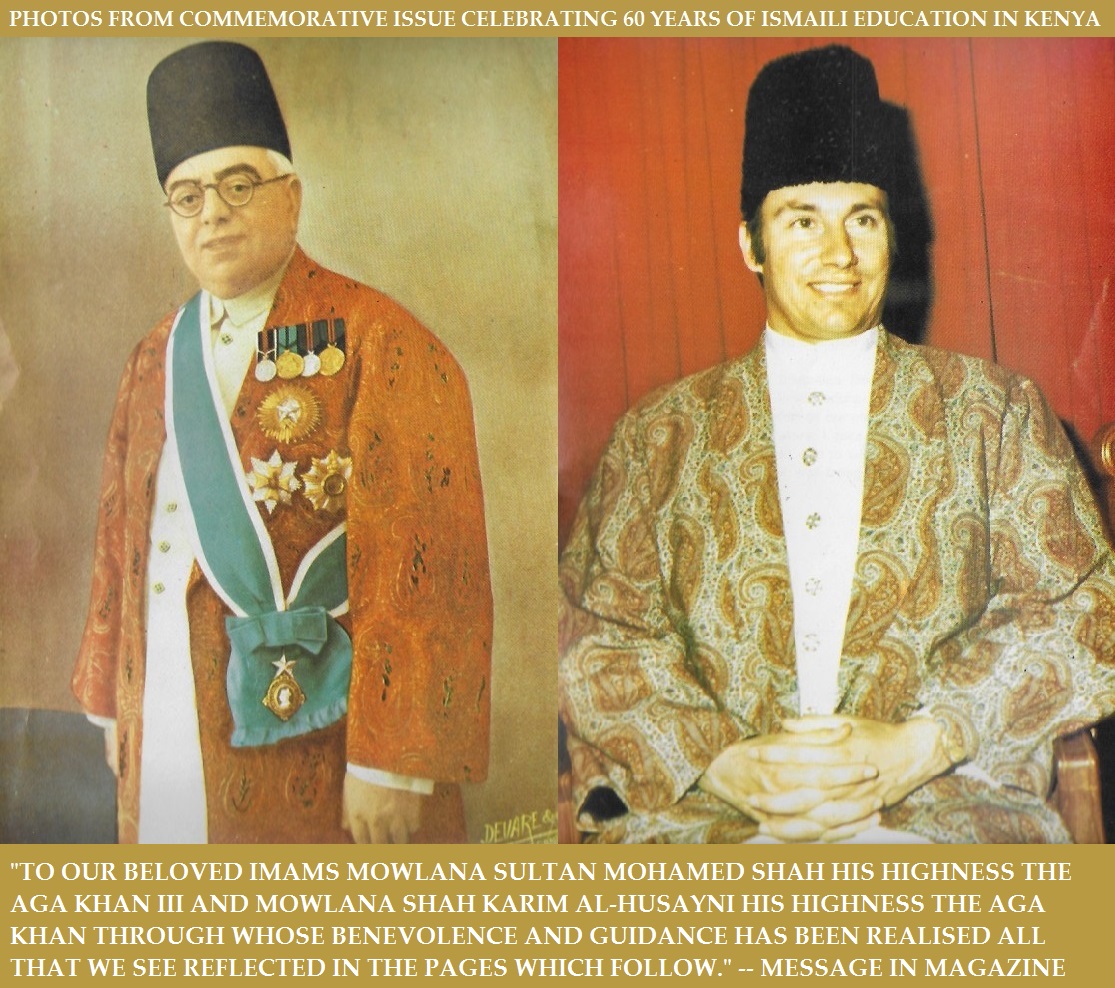 During one of my recent visits to Vancouver, I was very pleased to personally meet with Mr. Ahamed Ismail, with whom I had been communicating via email for a number of years. He graciously treated me to a wonderful buffet lunch at an Indian restaurant close to the Ismaili Centre on Canada Way. He then deeply touched me when he presented me with his personal copy of a 1977-1978 Commemorative Issue celebrating sixty years of Ismaili education in Kenya, published by His Highness the Aga Khan Education Department for Kenya.

Parting with rare books and magazines or even lending them to others is something I would normally not do, and I also advise my friends not to lend their rare literature. Mr. Ismail, however, gifted me the magazine because he was confident I would treat it with care and that I would use some material from it for the benefit of readers of Barakah. I am now delighted to fulfill his wish, but first I want to introduce Ahamed Ismail to readers through a memorable  event that took place in his life in 1957 when he was a young student. His account originally appeared in Simerg a few years ago. Mr. Ismail wrote:

“I arrived in Dar es Salaam for further studies from the small town of Musoma in 1956. Karim Master was the head teacher of religious studies, and I soon came to know him.

“I found that he took a keen interest in every student. He expected us to learn our history well, and recite the Dua, Ginans and the Eid Namaz in the best possible manner.

“Though strict, he was extremely kind hearted and fair. He greatly helped and encouraged me to sing Ginans and learn their meanings.

“Within a short period after my arrival, he taught and prepared me to recite the Eid Namaz in Dar es Salaam’s Darkhana Jamatkhana in 1956.

“In late 1950’s, Mawlana Hazar Imam, as I recollect, visited Dar es Salaam twice. The first visit was for the ceremonial installation (or the Takhtnashini) as our 49th Imam in 1957, and the later visit was for numerous other events, including the opening of the newly built Aga Khan Primary School.

“In preparation for the opening of the school, Karim Master chose me to recite verses from the Holy Qur’an in the presence of our beloved Imam. Karim Master selected Sura Fateha and Sura Ikhlas. He would call me into his office every day for almost two weeks, and ensured that my recitation was perfect for the big day.

“On the day of the opening of the Aga Khan Primary School, I went straight from my class to the site in my secondary school uniform – I was then in Grade 10. The opening was attended by numerous dignitaries including the Education Administrator, (Vazir) Alnoor Kassum, and the Liwali (Governor) of Dar es Salaam.

“The recital went really well and at its conclusion I was glad to learn that someone had taken photos of Mawlana Hazar Imam with me.

“I give my humble shukrana to Mawlana Hazar Imam for this wonderful blessing. I owe this unique lifetime opportunity to one of the greatest and finest human beings I have known in my life – the iconic Karim Master who inspired my religious outlook and understanding.”

The commemorative special issue that Ahamed Ismail presented me is dedicated to our beloved 48th and 49th Imams and begins with the following words in its opening pages.

The magazine was edited by Izzat Muneyb, who passed away suddenly a few years ago. I fondly remember Izzat for the wonderful pieces she wrote for this blog’s sister website Simerg. The 254 page glossy magazine that she edited is rich in articles and photos.

I offer my sincere thanks to Ahamed Ismail, without whose generosity this post would not have materialized. 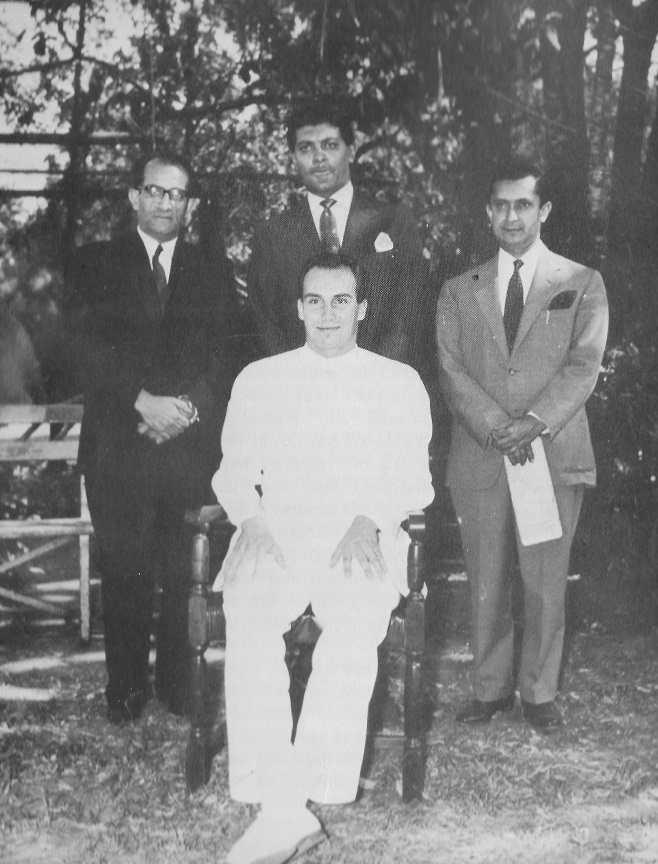 A facsimile of the original paper on which Mawlana Hazar Imam worked out a maths problem with Yasmin Mollo (see previous photo). Photo: Commemorative Issue 1977-1978. 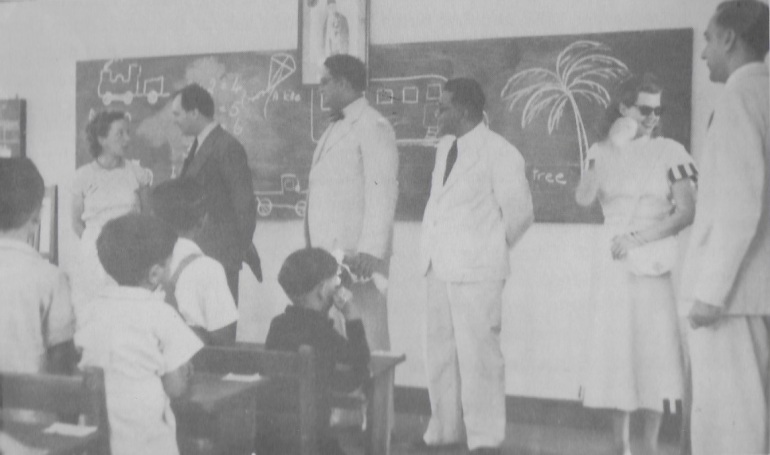 Mawlana Sultan Mahomed Shah with Count Salehmohamed Ladha and his family at Cannes when a decision was taken to form the Salehmohamed Ladha Trust. Numerous institutions such as the Aga Khan Nursery Schools in Nairobi, Dar es Salaam, Zanzibar and Kampala as well as the Machakos Library in Dar es Salaam fell under the patronage of the Trust. Photo: Commemorative Issue 1977-1978.

An excerpt from a message by Mawlana Sultan Mahomed Shah on the occasion of the presentation of the Platinum Fund in Cairo on February 28, 1955. Photo: Commemorative Issue 1977-1978.

Mawlana Hazar Imam greets Mrs. A Brennan, who was in charge of the Aga Khan Nursery School in Mombasa from 1951-1961. Badrudin Kanji, then Chairman of Mombasa Provincial Education Board, and Amirali Rashid, partly hidden, look on. Photo: Commemorative Issue 1977-1978. 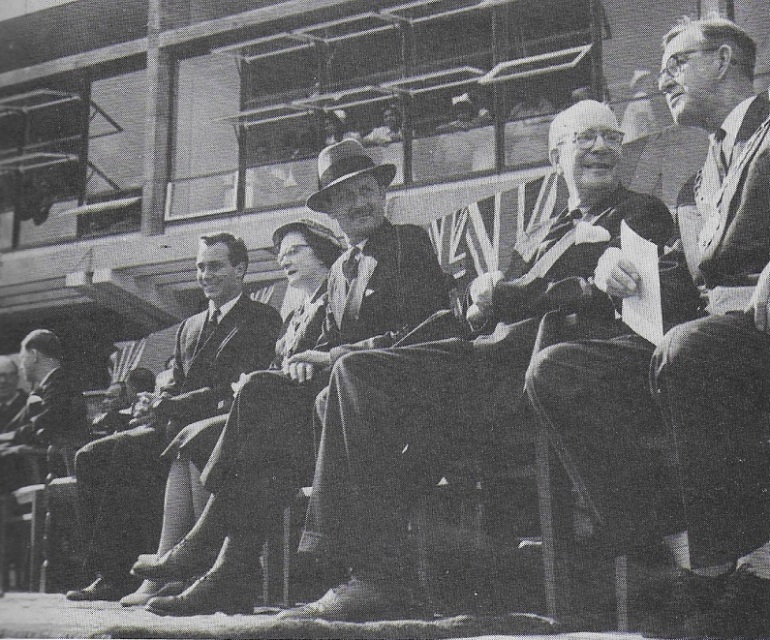 Mawlana Hazar Imam at the opening of the Platinum Jubilee Hospital in Nairobi in September 1958. He made two points: “This hospital is intended for all communities and all races. This building must become a monument to the idea of racial partnership.” Seated on Hazar Imam’s right is the Mayor of Nairobi, Her Worship Needham Clarke and other distinguished guests. A few nurses are seen watching the proceedings from the first floor window. Photo: Commemorative Issue 1977-1978.

Mawlana Hazar Imam lays the foundation stone on September 25, 1959 of the first ever swimming pool built in the Aga Khan schools in Kenya. Mawlana Hazar Imam stressed the importance of having swimming and other extra curricular activities in the school. The pool at the Aga Khan Primary School was opened by Sir Patrick Renison, the then Governor of Kenya on June 17, 1960. Photo: Commemorative Issue 1977-1978.

Begum Salimah looking on as children at the Deaf Unit demonstrate the use of their group hearing aid to the instructions of Mrs. Hassanali during the Begum’s visit to the Aga Khan Primary School in 1972. Photo: Commemorative Issue 1977-1978. 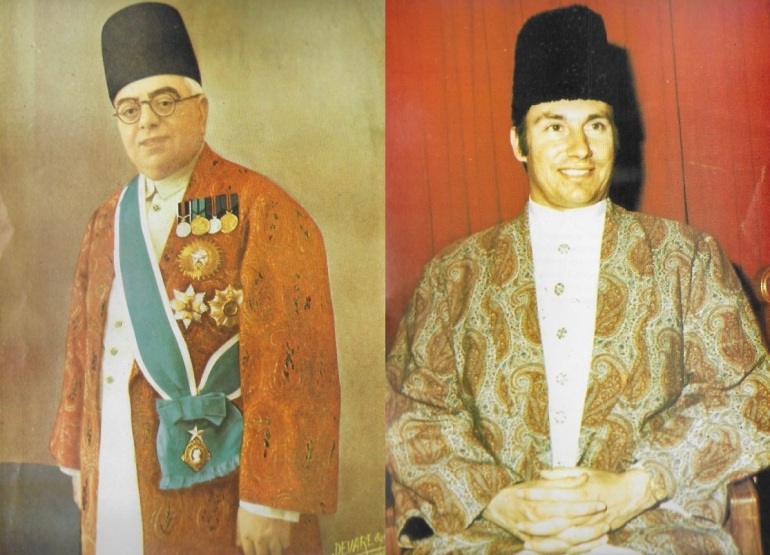 Before departing this website, may we suggest that you visit Barakah’s Table of Contents for links to more than 140 pieces dedicated to Mawlana Hazar Imam and his family.